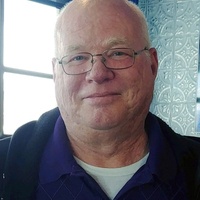 William Bruce Bickley, passed away in his home in Bluffdale, Utah on December 1st, 2020 at the young age of 68.

He was born October 3, 1952. He was the third child born to Paul Bickley and Katherine Marie Falkner.  He was around 5 years old when his family moved to Murray Utah.  He graduated from Murray High School and later attended Salt Lake Community College where he studied Maintenance Mechanics.

Bruce gained a love of gardening from his paternal grandfather, Nephi Bickley and later worked as a groundskeeper for the University of Utah. He then worked for Sweets Candy Company, and later moved on to work for Swire Coca-Cola where he retired after nearly 30 years.

He was a member of the Church of Jesus Christ of Latter Day Saints. On September 7,1979 he married his sweetheart, Jennifer Wiley, in the Salt Lake Temple where they were sealed for time and all eternity. They settled in Bluffdale and raised their identical twin daughters, Jenny and Katie.

Bruce loved fishing, camping, cars, all types of music, and especially spending time with his family. He rarely missed a recital, performance, birthday or graduation because even the smallest things were important to him. He was an excellent guitarist and in his younger years he played in a rock band. Their group even performed at dances, but were happy just jammin’ together. Bruce was considered a jack-of-all-trades and if there was something he didn’t know how to do, he would research it until he did. Another of his passions was family history. He was always so excited to share each new discovery. He loved cooking, canning, juicing and making sauces and always watched with excitement for his fruits and vegetables to be ripe for the picking.

He was adored by his daughters and granddaughters with his cute and funny ways of entertaining them to make them laugh. In fact, all of his friends and family knew if they were going to be hanging out with Bruce, then they were in for a good time because he made everything fun. The world without him in it will certainly be less bright and he’ll be truly missed.

He was preceded in death by his parents Paul and Katherine Marie Falkner Bickley; his sister Katherine Smith.

Funeral services to be held at 12 PM, December 7th 2020, with the viewing starting 30 minutes prior at Bluffdale 15th Ward; 14650 S 3200 W. Bishop Alan Christiansen will be conducting the services.

Precautions will be taken in respect to Covid-19 guidelines. Masks and social distancing required. For those of you who wish to attend virtually, the services will be streamed on the Bluffdale 15th Ward website.

Contributions can be made for his widow, Jennie Bickley, on the GoFundMe website.

To send a flower arrangement or to plant trees in memory of William Bruce Bickley, please click here to visit our Sympathy Store.

To order memorial trees or send flowers to the family in memory of William Bruce Bickley, please visit our flower store.