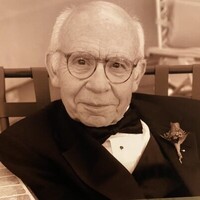 Willi Ochsenhirt, age 92, passed away Sunday afternoon, November 1, 2020.  He was born July 25, 1928 to Friedrich and Emilie Ochsenhirt in Essen, Germany.

He was the youngest of twelve children and adored by all of his brothers and sisters. Willi experienced many difficult things in World War II, but never lost his faith or became bitter.  He served a mission in his beloved Germany.  After his mission he immigrated to Nova Scotia, Canada.  Inge joined him and they were married June 3, 1952 and were later sealed in the Salt Lake Temple.

Together they had two children, Angelika and William.  Their family moved to Granger, Utah in the late 1950s. Willi was a craftsman doing sheetrock, brick work, and tiling and took great pride in his work. Serving in the bishopric of the Jordan North Sixth Ward brought him great joy.  Willi was short in stature but was a giant in his devotion to the Lord.

Inge passed away in 1990.  He married Lois Mae Miller in 1993. They moved into a home in Riverton that Willi helped build.

Willi served as an ordinance worker for twenty-two years in the Jordan River Temple.  He and his wife attended the temple often, sometimes doing more than 900 sessions a year. Genealogy and researching family names were a passion of his.  He was a devoted BYU fan and he and his wife had season football tickets for many years.

Some of his favorite things were babies and little children, chocolate, German food, ice cream, popcorn, reading, and watching sports on TV.

His favorite saying, in his thick German accent, was “Oh, for Pete’s sake!” which he is probably now saying in heaven.

Heartfelt gratitude to Beehive Home of Draper for their loving care of Willi the past year.

In lieu of flowers, donations can be made to the General Missionary Fund of The Church of Jesus Christ of Latter-day Saints.

God Be with You Till We Meet Again

To send a flower arrangement or to plant trees in memory of Willi Ochsenhirt, please click here to visit our Sympathy Store.

To order memorial trees or send flowers to the family in memory of Willi Ochsenhirt, please visit our flower store.