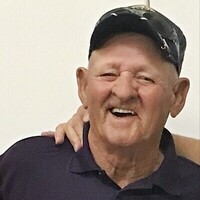 Bill was born in Detroit, Michigan, to Harvey Everett Beal and Mary Margaret McIntosh on September 30, 1936. He married Barbara Stapley on May 10, 1958. They later divorced. After several years, he married Linda Ferguson on March 10, 1984. He worked in the irrigation business for many years and later as a truck driver. Bill is a veteran of the United States Air Force, having served during the Korean War from 1954-1957.

Bill received his most enjoyment while spending time with his family and friends. He especially enjoyed barbecues and swimming pool parties. He also loved golfing with friends a few times a week and with family as much as possible. In his younger years, Bill was a Yo-Yo champion and a professional pool player. He also enjoyed playing fast-pitch softball and was very accomplished at whistling.

Bill is preceded in death by his father; mother; two sisters, Barbara and Patricia; brother Edmund; stepdaughter Deann; and his wife Linda.

Bill is survived by his children: Vickie Rasmussen of West Valley, Rick (Tracie) Smith of Ogden, Anna (Kevin) Degen of Taylorsville, Johnny (Diana) Beal of Nampa, Idaho; stepson Pete (Birgit) Pulli of Pleasant View; and his 1st spouse, Barbara Derhak, of West Valley. Bill is also survived by 18 grandchildren including Destiny Willmore of Salt Lake, whom he had the opportunity to help raise; 19 great-grandchildren; and one great-great-grandchild.

The family wishes to extend our sincere thanks to Nikki Rodrigue and all the staff at Active Home Health and Hospice.

To send a flower arrangement or to plant trees in memory of Wilfred Charles Beal, please click here to visit our Sympathy Store.

To order memorial trees or send flowers to the family in memory of Wilfred Charles Beal, please visit our flower store.