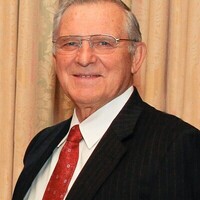 “Wayne” Boam was born on January 31, 1941 in Holladay, Utah and left this earthly life on October 4, 2021, surrounded by his family in his home in Taylorsville, Utah. We are certain he was greeted by his parents, Grant Odell and Rosa Afton Boam. Wayne’s siblings all survive him. Anne (Richard) Smith, Joyce (Brent) Anderson, and Thomas “Lee” (Myrna) Boam.

In his youth, Wayne learned to work hard, as a necessary assistant to his father in his large animal veterinary practice.  Many a calf was born, calves de-horned and herds of cattle were vaccinated with the two working in tandem. Traveling to farms around the Salt Lake Valley, Wayne learned about veterinary medicine and memorized poetic masterpieces- treasures he later passed on to his children. Even until his last breath his memory was like a steel trap!

In 1959, Wayne graduated from Granite High School. He was a state champion wrestler his senior year and was coached by the legendary Lavell Edwards in both football and wrestling. He made some lifelong friends at Granite. In high school, he met Sharon Hintze, who later became his eternal sweetheart.

Wayne was called to serve as a missionary for The Church of Jesus Christ of Latter-day Saints, in the Germany, Bavaria Mission (1960-1963). Wayne and Sharon were married November 15, 1963. He is survived by his wife Sharon and children: Karine (Greg) Romero, Bryan (Janalee) Boam, Jan (Byron) Holmstead, Billy (Rebecca) Sinclair, Dale (Tammis) Boam and Christy Boam. In their early married life, they welcomed a young teen Jane (Sherwin) Seamons, to their little family and she later was raised by Wayne’s parents.  “Poppi” as he is known to his family, leaves behind 23 grandchildren and 11 great-grandchildren who dearly love him. He rejoiced in their happiness and mourned their sorrows.  He was preceded in death by a grandson, Harrison Boam.

Wayne was a Utah State Aggie, and then attended veterinary school at Michigan State University.  He also attended Colorado State University studying pathology.  In 1972 Dr. Boam purchased Sugarhouse Veterinary Hospital. He later became a well-known Veterinary Orthopedic Surgeon operating in Utah, Washington, California and Germany. He treasured the clinics, staff and veterinarians he worked with.  He found great joy in helping heal animals and the happiness this brought their owners. Wayne never figured out retirement. At the age of 80 he completed his last surgery in June of 2021, shortly after he was diagnosed with pancreatic cancer. In his early days of veterinary medicine, he “worked to live”, but in his older years he “lived to work”.

He served as a dedicated home teacher (minister), Sunday school teacher, scout leader, high councilman, bishop and in the Taylorsville Utah Stake presidency. In July 1993 - July 1996, Wayne and Sharon served in Germany; Wayne, as the Mission President of the Munich Germany Mission. They had 498 missionaries all of which became very dear to them. This experience was something he cherished until his last day on the earth. He always had a story or lesson to share about this time as “President Boam”.  Later in life, he and Sharon also serviced as YSA missionaries throughout all of Europe from 2006-2008.

Not much good can come from a terminal diagnosis of pancreatic cancer, but for Wayne it gave him and those he loved the unique opportunity to say their last goodbyes. He was touched by the many who sent letters, made phone calls, and came to visit.

A special thank you to Dr. Conon Kinsey and his staff at Huntsman Cancer Hospital. We felt his kindness and knowledge in many ways. We send virtual hug to Meredith “Ditty” Bannon PA for helping with the pain and suffering, and having the difficult conversations. Much appreciation to Miwa and Karen and others from Auburn Crest Home Health and Hospice for walking us through the last days. Much love to Taunie, Keri and Nancy (HomeInstead) for their tender care of our dad and mom at his most vulnerable time.  In lieu of flowers Wayne’s family would be honored to have you donate to any of the following charitable organizations that were important to him.

Services will be streamed through a live broadcast :

To order memorial trees or send flowers to the family in memory of Wayne Boam, please visit our flower store.