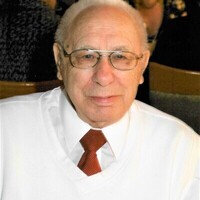 Wally was born March 21, 1928, in Cardston, Alberta, a son of Lawrence and Virgean Smith Newton. He passes on a rich heritage to his numerous posterity: his paternal grandfather, Sam Smith Newton, was a noted architect and builder, best known as the stonemason for the Latter- day Saint temple in Cardston; a maternal great-great-grandmother, Amanda Barnes Smith, is remembered for her heroism at the Hawn’s Mill Massacre. In his 92 years of life, Wally also forged his own legacy of hard work, resilience, and humor.

Wally served a full-time mission for The Church of Jesus Christ of Latter-day Saints in Samoa. In addition to preaching the gospel, he laid brick, worked on a cattle ranch, helped translate scripture into Samoan, and taught music, seminary, and English at a local school. He had a gift for languages that many of his descendants now share.

Educated at the University of Alberta (where he earned a teaching certificate) and Brigham Young University (bachelor’s degree in health, physical education and recreation), Wally   became a United States citizen in 1960. He was a jack of all trades who worked with his hands as well as his mind. Among other vocational pursuits, he earned his living as a farmhand, brick mason, schoolteacher, salesman, deliveryman, square dance caller, basketball referee,  baseball umpire, party planner, and teacher. After marrying Ethel Norene Johnson in the Salt Lake Temple on August 19, 1953, he often worked multiple jobs to support his growing family. He served his church in numerous capacities, including as a builder, member locator, choir member, and temple ordinance worker. Wally has read the Book of Mormon so many times, he and Norene have lost count.

Always quick with a joke or pun, Wally was a man of many hobbies. He excelled at yodeling, country-western singing, guitar playing, ballroom and square dancing, bowling, golf, and billiards.

He was preceded in death by his parents; siblings Howard, Marilyn, Shirley, and Donald  (Colleen, also deceased); a grandson, Spencer Wallace Newton; and a great-grandson, Jesse Fetzer.

Norene and family are grateful for the kind and capable assistance of Amber, Becky, Hannah, Micah and Careli from Valeo Home Health and Hospice during Wally’s final months.

A private service will be held on Saturday, May 30, 2020. In lieu of flowers, donations to The Church of Jesus Christ of Latter-day Saints Temple Fund would be appreciated.

Please refer to the photo gallery (on the left side menu) for a complete list of Wallace's descendants.

To send a flower arrangement or to plant trees in memory of Wallace Smith Newton, please click here to visit our Sympathy Store.

To order memorial trees or send flowers to the family in memory of Wallace Smith Newton, please visit our flower store.