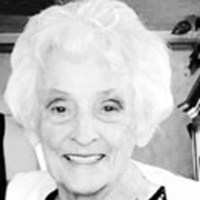 Violet Mary Snow passed away Monday, September 30, 2019 at age 92 of causes incident to age. She was born January 31, 1927 in Garfield Utah to Foster Ray Snow and Mary Hutchison Sykes.

She moved to the Salt Lake City area in her adolescence and graduated from West High school. Shortly after the war she met and married Gayle Patonai and together they brought eight children into the world.

Her career was highlighted as a supervisor at Litton Industry but it was the experience she gained as an orderly at the state mental ward that helped her raise and guide those eight kids. She was known to many as Mom and her pool in Amanda Acres kept the neighborhood kids of all ages delighted. She was a member of St Peter Paul Catholic church where she sang in the choir and helped on the bereavement committee. She was honored with Catholic woman of the year.

She is preceded in death by her husband Gayle; her children Linda, Susan, Andrew; and three grandchildren.

A Requiem Mass will be celebrated at St Peter Paul Catholic church at 10:00 am Friday, October 4, 2019 followed by interment at Redwood Memorial Estates. There will be a luncheon at the Church following the interment. An open house will be held Saturday, October 5th from 3-5pm at 5508 W. Maudine Ave. Instead of flowers please consider a donation to the Utah Humane Society.

To send a flower arrangement or to plant trees in memory of Violet Mary Snow Patonai, please click here to visit our Sympathy Store.

To order memorial trees or send flowers to the family in memory of Violet Mary Snow Patonai, please visit our flower store.