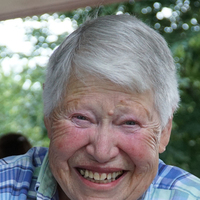 Verona Blackham Balle, 91, was reunited with her sweetheart Bobby on the first day of April 2020, following a separation of over 36 years due to his early passing. She was sealed to Bobby Leroy Balle in the Manti Temple on 17 December 1954 and has been waiting for him to come for her. Their family is rejoicing that Bob and Verona are together once again, never again to be separated through all eternity.

Verona came into this world on 20 July 1928 in Fountain Green, Utah, at the home of her maternal grandparents. She was the first child of Lester and Frances Blackham whose home was in Kenilworth, Carbon County, Utah. She loved living in this little mining town where life was both joyful and challenging. She enjoyed the company of her paternal grandparents and numerous uncles, aunts, and cousins. She and her siblings have happy memories of Kenilworth ranging from hikes in the foothills, their school friends, their little Church branch, the movie house, and goodies at the Kenilworth Merc and ice cream shop. Their father Lester, known as Jumbo in the softball world, hit many over the fence in the field just out of town. Verona’s mother Frances Smyth, who graduated as valedictorian from Snow College, was a teacher at the Kenilworth School when she met and married Lester. Frances brought the love of the gospel, learning, and music into their home. Verona spoke of hiding from her scary father coming in the front door covered in black soot from his day in the mine, memories of her grandfather who cared for the mine horses, and that scary whistle that sounded when someone was injured in the mine. No one wanted to hear that.

Verona’s innate desire to learn and to serve led her to seek an education in Nursing. She graduated from the University of Utah School of Nursing in 1950, then, due to her love of Jesus Christ and His restored gospel, served a mission for The Church of Jesus Christ of Latter-day Saints. She was called to the Uruguay-Paraguay mission, serving from 1950 to 1952. While she loved proselyting, her musical talents gave her opportunity to share the gospel through music. In addition to playing the piano and organ in worship services, she toured the mission with her accordion, providing accompaniment for her singing companion in concerts and live radio broadcasts. Her music reached thousands. She learned to love the Spanish language and kept it fresh following her mission by reading aloud a chapter a day from the Book of Mormon in Spanish. She followed this pattern for 70 years, up to just a few days prior to her passing. She conversed in Spanish with family members just the day prior to her passing.

Following her mission, she began teaching in the Nursing program at Brigham Young University when she met her eternal companion-to-be, Bobby, on a blind date. At first, she was not all that impressed with Bob, but continued to date him, seeking confirmation after he proposed marriage. She has since shared with her family a powerful spiritual experience regarding Bob, but once she met Bob’s parents, that “sealed the deal”. She loved the opportunity to teach at BYU but chose to move to Salt Lake City where Bob had employment and she could continue her career in nursing. She encouraged Bob to seek training to improve his education and employment. He chose to become a barber, eventually running a one-chair shop - Bob’s Barber Shop in Murray, Utah.

Verona’s life was centered on Jesus Christ, so when she and Bob started a family and settled in Kearns, Utah, the local ward and stake became their focus of service. Verona continued to develop and share her musical talent and served as ward choir pianist for many years, along with accompanying many individuals and singing groups. Her love of music and ability to arrange special numbers brought the Spirit of God into the lives of many, some in profound ways, of which she was not always aware. She passed this love of music to her posterity, many of whom have even surpassed her level of expertise.

She served in many callings in the ward, including as Young Women’s President, three separate times as Ward Relief Society President, and once as Stake Relief Society President. She was especially busy when Kennecott would go out on strike, impacting multiple families simultaneously. Our memory as children was to see both mother and father serving tirelessly in whatever calling they had. Verona served devotedly in her callings despite working two days a week at Valley West (now Pioneer Valley) Hospital. She also provided loving service to individuals who needed allergy shots, and to those who were suffering with critical illnesses, such as cancer. Her children remember well the many who would come to our home for regular shots, and going with Mom to give shots and administer relief to an ailing friend. She was known by all to be ready and willing to serve. This selfless service was offered while she cared for her husband and four children, none of us ever feeling short-changed (with two exceptions – Dad once called Mom during her presidency meeting asking for an appointment, and the goodies she baked were often going elsewhere). We love to serve because she showed us how it is done!

Verona loved her ancestors and came to cherish the sacrifices they made for Christ’s sake. Christmas gifts to her family, particularly in later years, were compilations of family histories. She helped us understand how courageous and devoted these early converts were to their faith in God, their Savior, and the restored gospel. All in her family, and beyond, know well the names of Cordelia Morley Cox, Martha Robinson Blackham, Frederick Walter Cox, Isaac Morley, and many more. Her maternal great grandparents, Francis and Elizabeth Cox, who she knew into her teenage years, were called by Brigham Young to settle a portion in Arizona known as the “Strip”.  She personally knew people who personally knew Brigham Young. Her years of devoted service to have Temple work performed for loved ones, and her knowledge of their faith and history, will be a source of great joy as she comes to know them personally.

Following the unexpected passing of her sweetheart Bob, Verona continued her career as an RN at Pioneer Valley hospital until her retirement in 1993. Her son Wayne attended the retirement party in her husband’s place and discovered a Mom he never knew. She was the life of the party - she was funny, jovial, witty, and clearly loved by her colleagues. Her last assignment at the hospital was as Program Director of Infection Control.

After retirement, Verona sold her home in Kearns and moved into a basement apartment with her daughter Colleen and her family in Lehi, Utah. She desired the full-time company of her family, so moved from the ward that she had loved and served for decades. However, not only did she retain those lifelong friends, but made many more in the ward where she continued her service. She has been loved and served by many loving friends of whom she spoke frequently. We express gratitude to all of these kind people who have served her over the years, including the many young men who brought her the sacrament each Sunday when she was unable to attend meetings.

Verona loved being with her family. She loved vacationing with them when she was able, and once rode every ride at Disneyland with her grandchildren when their mother, Colleen was pregnant. When the family all got together, she would find a comfortable place to observe the commotion and camaraderie of three generations of descendants. She often expressed gratitude and joy in seeing her children, grandchildren, and great-grandchildren being raised in the restored gospel of Jesus Christ. To her, there could be no greater joy. As expressed in jest just a few days prior to her passing, “there’s not an ugly kid in the lot” - a sentiment held by every mother, grandmother, and great grandmother, eloquently stated by a great lady!

Verona was preceded in death by her husband Bob; parents Lester and Frances Blackham; and brothers Paul, Charles, and Lester Jr. She is survived by siblings Frances Cunningham, Frank Blackham, and Fred Blackham; her four children and their spouses: Carol and Doug Morse, Wayne and Kathryn Balle, Sandra and Ken Hamblin, and Colleen and Jeff Parry. She was blessed with sixteen grandchildren, who love their grandma deeply, and 34 great-grandchildren, many of whom will remember her well and cherish the time they had with her.

The family expresses gratitude to the wonderful doctors, nurses, and aides of Envision Hospice who blessed our mother with their kindness and devoted service. Shelley, we are most grateful for you, as is our mother. She spoke often of you and all who served with you. Thank you! We also express gratitude to the many doctors and nurses who served Mom over the last years of her life. Annette Gwilliam and her Hyperbaric team at Utah Valley Regional Medical Center helped Mom heal when nothing else worked. She came to know and love each of you. You brought her comfort when she was afraid and worried. Thank you! We also express gratitude to her myriad friends that allowed her to serve you, which has been reciprocated many times over. Thank you!

We also express gratitude for a Loving Father in Heaven who sent His Son that we all might live, love, die, resurrect, and be reunited. Our love for our Father and Savior is rooted in the love our parents showed to us and to their Father and Savior.

Mom, Mama, Grandma, and Great Grandma, we will miss you and look forward to being in your presence again. We are so happy you are with Dad! How we love both of you!

In lieu of flowers, please share your thoughts, feelings, or an experience you had with Verona on this website.

Due to COVID-19, there will be no public viewing or funeral. The family will hold a Musical Celebration of Life for Verona on July 20, her birthday, pending resolution of the pandemic.

To send a flower arrangement or to plant trees in memory of Verona Blackham Balle, please click here to visit our Sympathy Store.

To order memorial trees or send flowers to the family in memory of Verona Blackham Balle, please visit our flower store.