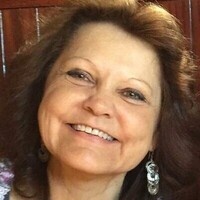 January 23, 2022, Heaven called back one of their most dedicated angels. Teri Lyn Gerber was born August 30, 1963, to Larry and Della Mutchie in Page, Arizona. Teri was diagnosed with juvenile diabetes at age 8 although you would never know with how much spunk she had in her step. She never let that or any of her other health issues hold her back.  Teri graduated high school in 1981 while going to beauty school to become a beautician at the same time. She got married and welcomed her only child, Nicole in 1985 and later divorced.

If you knew Teri, you knew that she had three major loves in her life; her two granddaughters, Maya and Ariana and then her love and devotion to her Lord and Savior Jesus Christ. Teri lived her life as an honest Christian woman. Every morning she would be up reading her Bible with her coffee no matter how many times she's read it. She knew that she could get through anything with God, which is how she got through the death of her daughter Nicole in 2017. After that, Teri became the guardian of her two grandbabies and would live the rest of her days for these girls. Now she will forever be their guardian angel.  Besides being an amazing Grandma, Teri was also a phenomenal Aunt. Dubbed "Aunt Tay" she was always there for every one of her nieces and nephews. Teri had the largest heart and was so kind to everyone she ever met. She will be deeply missed by everyone she knew and loved.

To order memorial trees or send flowers to the family in memory of Teri Lyn Gerber, please visit our flower store.