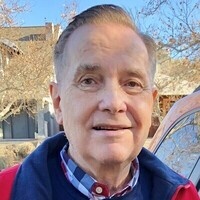 Our brother and uncle Theodore “Teddy” Martin Johnson, Jr., passed away on November 20, 2020 from natural causes while a resident at The Cascades at Riverwalk nursing home in Midvale, Utah. Teddy was born on December 24, 1944 (a Christmas present) in Salt Lake City, Utah, the oldest child of Theodore Martin Johnson and Elizabeth Jane Blaney Johnson. He loved and was raised by his great aunt, Vilate Kimball Blaney.

Teddy graduated from East High School in Salt Lake City in 1964. He loved the time he worked as a bellman during summers at Jackson Lake Lodge to earn funds for his Bachelor of Science Degree in Sociology education at University of Utah, graduating in 1971. He lived most of his adult life in southern California where he worked at the Herald Examiner while earning his Master of Science Degree in Library Science from California State University Fullerton in 1978.

Teddy’s love of his Swedish heritage and everything Swedish lead him to make many trips to Sweden to visit pen pals and friends.

As a young man, Teddy learned to play the accordion, and taught himself to play classical piano on the grand piano in the home where we grew up. His love of piano inspired him to obtain a Master’s Certificate in piano tuning and to start his own piano tuning business, allowing him to work from home in La Canada, California until he retired. He took great pride in perfecting his piano tuning technique and tuned pianos for a school district as well as several celebrities in the area. Teddy moved back to Utah in November 2017 due to failing mental and physical health issues. He was diagnosed with advanced Alzheimer’s after his return to Utah.

We wish to thank the wonderful caregivers and employees at The Cascades at Riverwalk Nursing Home and Lone Peak Family Physicians for their wonderful care, assistance, and kindness to Teddy as he dealt with his declining mental and physical health.

Teddy will be interned at Sandy City Cemetery, 9000 South and 700 East, next to his mother on Wednesday, November 25, 2020, where there will be a graveside service for Teddy’s immediate family. McDougal Funeral Home, 4330 S. Redwood Road, Taylorsville, UT will handle the funeral arrangements.

To send a flower arrangement or to plant trees in memory of Teddy Martin Johnson, please click here to visit our Sympathy Store.

To order memorial trees or send flowers to the family in memory of Teddy Martin Johnson, please visit our flower store.