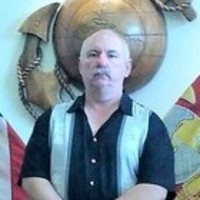 Theodore (Ted) William Conrad was born on November 10, 1955 in Sterling, Kansas. He was the second child of six born to Ralph William Conrad and Shirley Kathleen Bradrick Conrad. Ted passed away on November 14, 2019, four days after his 64th birthday. Ted was very happy he could visit with his mother, just two weeks before his death.

He lived in many different cities and towns growing up and shared many memories of his adventures with his siblings and friends. There was $5 season passes of skiing, the swimming pool, football, baseball, playing on railroad tracks among so many others. His mom and dad would take their kids on ghost towning and photography trips and he loved to tell the tale of when he stepped on a nail “that went all the way up to the ankle” and how the trip to the hospital took forever because his dad kept stopping for just one more photo.

Ted was born on the birthdate of the United States Marine Corp. It just made sense that he would become a marine. With some time in the JROTC in Joplin, MO, he went on to step on the yellow footprints in San Diego when he was barely out of high school at 17 years old. He spent the next four years living a military life that included, “I can’t tell you about that, it’s classified”.

After the Marine Corp, Ted became a tech geek, specifically geeking out to telephones and radios. He travelled the country working on phones and radios. Usually, when someone talked to him the first time, the conversation ended with “how do you know so much?” He was currently working for Voice Carrier and his death will be a huge loss to them.

After September 11, 2001, Ted wanted to serve his country again and worked his way to Major in the Civil Air Patrol, which he was still active in. He earned many awards for the work he did for them.

He was the beloved father of Randi (Joe) Hitt (Phoenix, AZ) and Melody (Brett) Burnham (Idaho Falls). He would tell you that he never really thought about being a father, but once he was, he loved with all his heart.

He met his “babe” Colleen and they married on May 12, 2005. He became the most amazing dad to her three children, Crystal (Brandon) Walker, KayeLynn Farnworth and James (Rustie) Farnworth all of Salt Lake. He loved them as his own and never made them feel that they weren’t.

He became the best Papa Ted in the world to Aedynn, Zachary, Chelsea, Lydia, Gabriel, Cash, Penelope, Harper, Theadora and Aaron. They all ran to give him big hugs as soon as they saw him.

He is also survived by his mother Kathi (Joplin, MO) and his five siblings, Mary Castleberry (Joplin, MO), Chris Conrad (Greenburg, PA), Susan Guthrie (Joplin, MO), Mike Conrad (Deland, FL) and Patrick Conrad (Fort Smith, AR) as well as their spouses. He had many friends that will miss him dearly. He was preceded in death by his father.

He was a person who would go broke getting a good deal. There is a drawer full of Christmas gifts that were already purchased. You never knew what would be stuck in the Christmas stocking. He loved to travel with his wife, and they have been to many different places, near and far. Sadly, North Dakota will always be the one state he never made it to.

His death leaves a big hole in the hearts of many that knew him. He was a friend to anyone. You couldn’t help but love him, even when you disagreed with him. Oh, and how he loved being loved. Heaven has no idea what they are in for – but, I’m sure they will appreciate him. Rest in peace my love, I’ll catch up with you one day. To the moon and back.

To send a flower arrangement or to plant trees in memory of Ted William Conrad, please click here to visit our Sympathy Store.

To order memorial trees or send flowers to the family in memory of Ted William Conrad, please visit our flower store.