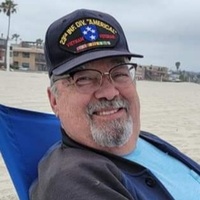 Stan Taylor died as he lived - surrounded by love. In his all too brief 74 years, he was so many important things to so many different people.  He was a talented artist, a dedicated teacher, a dutiful soldier, a beloved husband, an admired father, and a cherished grandfather. His life was an ode to the power of living an honest, earnest life.

Stanley Don Taylor was born November 1, 1947, to Edwin and Deon Taylor, and grew up in Magna, Utah. He was a happy, energetic boy who excelled at just about everything he tried. His family liked to joke that he was a “God” in high school, and it was funny because it was rooted in truth. Stan graduated from Cyprus High School in 1966, where he was the student body president, homecoming king, a member of Boys State, and the school’s Sterling Scholar in Art.

After high school he served a mission for The Church of Jesus Christ of Latter-day Saints to Scotland, and then came home and married Gae Petersen, whom he later divorced. He was drafted into the Vietnam War in 1969 and served with distinction and pride in the 23rd Infantry Division. He earned two bronze stars, awarded for heroic or meritorious service, and a purple heart, awarded to those wounded ‘by an instrument of war in the hands of the enemy.’

Like many Vietnam veterans, Stan came home and quietly went about trying to heal from the scars of war. His country did not celebrate his service when he returned, and it wasn’t something he talked about until much later in life. He was proud to have served, but he was quick to tell you about men he felt who were more courageous or worthy of admiration. He was patriotic to his core, and the state of this country was something that concerned him until his dying days. He loved America and saw the hopelessness some felt at the hostility that has gripped society so completely the last several years. His advice was simple - don’t give up. Ever. If you want to honor him and those who served alongside him, continue to fight to keep this country democratic and free.

In 1976, Stan married the love of his life, Anita Bawden Taylor. Together they created the kind of home that became a shelter from life’s storms for so many. Some shared their blood; others were bound to them through love and affection.

He graduated from the University of Utah in 1982 with a Bachelor of Fine Arts and began teaching at West Lake Junior High. He also taught at Granite High School but spent the majority of his teaching career at Hunter High School. In the late 90’s he completed a Master of Education. Stan was incredibly proud to have spent 27 years of his life as a teacher. He felt those who spent their lives in the classroom didn’t necessarily get the credit they deserved. But, like he did when he served in the military, he chose to focus his energy on those who mattered most - his students.

Stan has blessed many lives with his art, especially in the last 10 years. He had a gift for capturing the beauty of nature, but he also painted beautiful portraits of those he loved.  He survived a double lung transplant and cancer but succumbed to COVID-19 on October 11, 2021. He was one of the lucky ones, as his family was able to be with him in his final hours.

Stan’s legacy is far more vast than he could ever have imagined, but if there was one thing he was most proud of, it was his family. He is survived by his beloved wife Anita; and his children - Jamie Taylor and Torbjoern Bringedal, Mark and Jennifer Taylor, and Brandi Defa and Dave Erickson. He is also survived by his brothers and sisters: Allen, Dave, Cheryl and Janet. He also leaves the world with some amazing young human beings in his nine grandchildren and seven great-grandchildren. He was preceded in death by his parents, Edwin and Deon Taylor; and his sister, Dianne Taylor.

The world is a little colder without the warmth of Stan’s one-liners and his sense of humor, which could make you laugh, think and blush, all at the same time. But the love he gave and the example he offered will comfort and inspire us to live as he did - honestly and earnestly.

If you want to honor Stan’s life, the family suggests, in lieu of flowers, that a donation be sent to the transplant fund at the University of Utah: https://healthcare.utah.edu/foundation/give.php

To order memorial trees or send flowers to the family in memory of Stan Taylor, please visit our flower store.