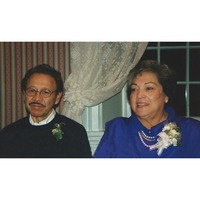 Preceded in death by his sister Betty; and brothers Daniel, Rudy and Ricky.

Salvador’s early childhood years were spent in Salt Lake City. In later childhood his family moved to Fresnillo, Mexico and then to Juarez, Mexico, where he met Alicia and they began their 70 plus year relationship. Salvador and Alicia’s marriage was solemnized in the Salt Lake Temple.  He was an exemplary devoted husband. He nurtured Alicia, throughout her illness and continued their life together after she moved to Carrington Court Assisted Living, visiting and caring for her daily.  Together they made a good life for their family, raising successful children, who raised successful grandchildren, who continue to raise successful great-grandchildren.

Education was important to Salvador.  He crossed the border each morning to go to school in El Paso, Texas, but circumstances did not allow him to finish his education.  Throughout his life he encouraged his children and grandchildren to make learning a priority.  He wanted their lives to be easier than his.

He started working at a young age and took pride in his work, no matter the task.  For many years he supported his family working at Interstate Brick Company.   On the job he had a life altering accident.  After recovering, he worked hard to retrain himself, attending night school to learn the trade of an upholsterer.  He eventually became part owner of an upholstery shop. Many family members benefited from his talent and having furniture he personalized for them.  His grandchildren love the child size rocking chairs he made for them.

Salvador enjoyed boxing and even had a few professional matches.  In his younger days he enjoyed participating in weight training and handball, which paid off in allowing him to live life to it’s fullest for his 89 years.  He loved joining our mother in her avid sports fandom, going to the Jazz games, Bees family night and with his boys to the U football games.

Salvador was a man of deep faith.  He served many callings in The Church of Jesus Christ of Latter-day Saints.   The family attended the Lucero Ward, where he was Sunday School Secretary and an Elder.   He had many callings but his favorite was working with incarcerated individuals at the Salt Lake County jail.  His faith provided comfort and purpose in his life.

Salvador’s pride and joy were his children, grandchildren and great-grandchildren. Abuelo (grandpa) displayed carino (affection) for his grandchildren and was proud of them.  He was always there for his family, providing encouragement; help with rides, trips and care.

Salvador and Alicia were happiest gathering family and guests for a Mexican dinner, they would spend the entire day preparing the feast, making sure there were leftovers for all. He kept his Mexican traditions alive in the home with movies, music, history, language, folklore, and stories of his youth in Mexico.  He patiently passed on the how to make masa for the tamales just the right consistency and how to work together for large family feasts.

Salvador was a nurturer, a peacemaker, kind, forgiving and treated people with respect and dignity.  He taught us life is precious and to not value material wealth over health, love and the basic everyday experience of life.

Special thanks to David Mendez, his brother, who contributed greatly to his care in his final months and Mindy, Nikki, Ashley, Sarah, Hillary and Michael from Active Hospice.

In lieu of flowers please donate to the Utah Arthritis Foundation.

To order memorial trees or send flowers to the family in memory of Salvador Abel Mendez, please visit our flower store.