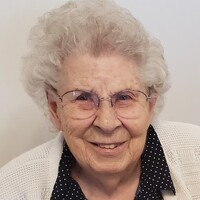 A remarkable centenarian, Ruth Reed Withers passed away on October 17, 2021 at the age of 101. Ruth was born the fifth of ten children to Maude Armstrong and James Henry Reed on April 12, 1920, at Butler Island near Ririe, Idaho. After graduating from Ririe schools, she attended Ricks College.

On July 7, 1941, Ruth married her high school sweetheart, Lowell Withers, and was later sealed for time and all eternity in the Idaho Falls Temple on May 31, 1968. When Lowell was drafted into the Army in June of 1942, Ruth went to work at Western Union in Salt Lake City, Utah. Upon Lowell’s return from the service, they purchased a home in Kearns, Utah, where they later raised their three sons, Syd, Ken, and Brian.

Ruth and Lowell were very active in the Cub Scouts and the scouting programs. Ruth served faithfully as a member of The Church of Jesus Christ of Latter-day Saints in numerous capacities including in the Relief Society presidency and Primary. She worked as a secretary and bookkeeper at Oquirrh Hills and Western Hills Elementary Schools and at the new Kearns High School in Granite School District.

After Lowell died on December 18, 1972, Ruth married David John Withers in the Idaho Falls Temple on April 13, 1974. Ruth and David served in the Florida Tallahassee Mission, spending much of their service in Selma, Alabama. They also served together in the Idaho Falls Temple for many years where David was a sealer. They loved the temple work and the years spent serving at the temple. Ruth was also very devoted to genealogy, writing her own personal history, doing extraction work at home for the Church for over twenty years, and participating avidly in the Church’s new indexing program. She had a knack for remembering family connections and knowing just how people were related to each other.

Ruth was known for her generosity, for her genuine connections with others, and for having an adventurous spirit--which was once again displayed when she went zip lining at the age of 99.

Throughout her life, she enjoyed attending numerous family gatherings, reunions, and celebrations. More than anything, Ruth loved spending time with her children and their families, her brothers and sisters, and extended families. In her 101+ years on earth, Ruth touched many lives and blessed countless people with her love and service.

In lieu of flowers, please consider a donation to your favorite charity in Ruth’s name.

To order memorial trees or send flowers to the family in memory of Ruth Withers, please visit our flower store.