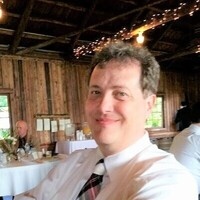 Roger Urry Cooke, 58 of West Valley City, lost his battle with appendix cancer and passed away on May 14, 2021 peacefully at home surrounded by his family.

Roger was born September 8, 1962 to Dallas Dunn and Janice Leone Urry Cooke, in Salt Lake City. He grew up in the Bennion Heights area of Taylorsville where he had friends he kept in contact with throughout his entire life. Many times, he would share the fond memories and stories of all the mischief he and his friends from the neighborhood got into as kids. He attended Kearns High School, where he graduated in 1981, and loved playing and travelling with the marching band. As an active member of The Church of Jesus Christ of Latter-day Saints, he served in the Missouri Independence Mission. He later earned a Bachelor’s degree and a Master’s of Business Administration in Accounting from the University of Utah. During his career, he worked tirelessly for his father at Dallas Cooke CPA, and later continued to run the family business as the owner and CFO of Cooke CPA. He loved his work and had no plans of retiring when he was diagnosed with cancer. Even in his last days, he continued to work and help clients and the community of Cooke CPA.

Roger enjoyed life to the fullest. He enjoyed hiking, camping, backpacking, was an Eagle Scout and loved serving as a Scoutmaster for several years. Many people may not know this, but Roger was also a great dancer. He was an insomniac because as he said, “tomorrow always brings a new adventure” and he was always excited to see what life had in store.

The biggest thing that stood out about Roger was his endless unconditional love and ability to serve to others, whether they were close friends and family, or displaced people struggling to find food, work, and shelter. Despite helping countless people throughout his life, he never wanted any credit or recognition for the difference he made in the lives of so many. The extent of the selfless help and service that he gave to others was not even known by his close family and friends, and we will never know just how far his care and positive influence will reach. It is rare to know someone who gave so freely and cared so deeply about others, and he was a blessing to everyone he came into contact with.

He is preceded in death by his father Dallas Dunn Cooke; and mother Janice Leone Urry.

To send a flower arrangement or to plant trees in memory of Roger Urry Cooke, please click here to visit our Sympathy Store.

To order memorial trees or send flowers to the family in memory of Roger Urry Cooke, please visit our flower store.