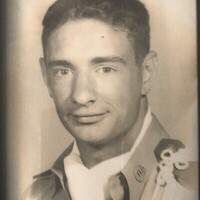 He married Alta Joyce Tanner in 1957 at the Ramstein Airforce Base in Germany Rhineland while serving as a pilot for the U.S. Air Force. They recently celebrated their 63rd wedding anniversary.

Their military journey continued with several stops throughout the United States including bases such as Luke Air Force Base (AFB) in Phoenix, AZ; Nellis AFB in Southern Nevada; McConnell AFB in Wichita KS; and March AFB (now Air Reserve Base) in Riverside, CA.

After leaving the Air Force, Bob returned to Kansas to start a cattle ranch with his best friend Leon (Sonny) Ross which operated for over 60 years. In 1961, the family relocated to Salt Lake City, Utah as Bob began a career as an air traffic controller with the Federal Aviation Administration. The next year they settled in Granger where they raised their four children.

In 1964, Bob joined the National Guard unit which was later the reserves. Bob completed his Bachelor of Science degree at Westminster College and later purchased a C-182 Cessna and joined a “flying club.”

The family would like to thank the special care of Lorna Middleton-Almond, Angelica Vasquez and the staff at Rocky Mountain Hospice, especially Carlos.

A private graveside service will be held on Friday, September 18, 2020 at Valley View Memorial Park, in West Valley City, Utah with the assistance of McDougal Funeral Home. In lieu of flowers, please consider donating financially or with service to the Wounded Warriors.

To send a flower arrangement or to plant trees in memory of Robert Lee Stalnaker, please click here to visit our Sympathy Store.

To order memorial trees or send flowers to the family in memory of Robert Lee Stalnaker, please visit our flower store.