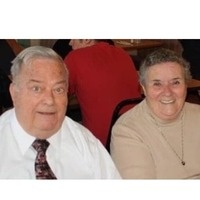 Bob joined the Navy with his mother’s permission in 1947 at the age of 17. The Navy became his life for the next 20 years. He met the future love of his life when introduced to Jeanellen on a blind date in 1950. He had many duty stations and was a Plank Owner on the USS Coral Sea. He was on the Coral Sea Group boxing and swimming team. Bob was on board a Navy Tug towing a barge on March 27, 1964, when the Great Alaskan Earthquake struck. He commented that you could see the land “rolling”, and the tsunami that struck right after caused extensive damage. The waves were up to 40’ tall, which were much larger than the tug! The captain immediately turned the ship around and the crew participated in emergency services to help the people devastated by this disaster. Bob was tasked with driving Gemini Rockets to the launch pad at Cape Canaveral, and I am sure he did not set any speed records moving those, unlike in his early teens in North Carolina when he would drive bootleg liquor for some of the local entrepreneurs.

Bob married the love of his life in 1951 and remained married for the next 70 years. He was asked at a point what the secret to his long marriage was, and without missing a beat my mother and father to us six adorable children looked at each other and said “we agreed that whoever filed for divorce had to take the kids”… wait… what?!!

Bob had a very wry sense of humor. When introduced to someone, in all seriousness he would look them in the eye and say “The name is Bob…. That’s with one ‘O’!!! He would leave it at that, and you would see the person work it out in their mind while he had a gleam in his eye. Oh, how he loved to see their face when they worked it out.

Not only was Bob a family man. He adored his wife, and no one was allowed to say anything bad to her. Not his sons… “If you ever want to take on dear o’l dad, just say the word, but don’t even insinuate with your mother!” Or in the Military. As an enlisted man all the Doctors were Officers, if they were not treating her with the respect she deserved, he would tell them, “I signed up for this, she didn’t” and demanded they show her the respect she deserved. It was a lesson instilled in each of us from a very young age.

Bob will be missed by everyone who came into his orbit. He had a joy for life, a sense of humor that never seemed to fail. He often said “When the good Lord wants me, I will be called home, I guess he doesn’t want me yet…” Well, I guess he was finally ready for one ‘O’ Bob to come home. He deserves his rest, but the stories will remain. We love you Dad, and we know that Families are Forever. Thank you for going before to prepare things for the rest of us. We will treasure our memories of you, and the example that you showed us in your everyday life. He didn’t let go of people just because the family dynamic might change. Former spouses were always welcome and were always treated with dignity and respect. It was not surprising to hear a daughter-in-law say that Bob was the best Father-in-law ever! He is loved.

With love, your beloved wife, your adorable (coughs) children, and the rest of the family tree that definitely seems to resemble a bush, you will be missed! The Lord said to multiply and replenish the earth… not Mars and half of Jupiter!

Funeral services will be held Thursday, July 1, 2021, 10:00 a.m., at McDougal Funeral Home, 4330 South Redwood Road, where a viewing will be held prior to services from 9-9:45 a.m. Interment, Utah Veterans Memorial Park. Family and friends may attend virtually at:

To send a flower arrangement or to plant trees in memory of Robert Donald Sims, please click here to visit our Sympathy Store.

To order memorial trees or send flowers to the family in memory of Robert Donald Sims, please visit our flower store.