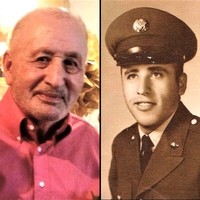 Robert was born on October 17, 1934 to Jose Rafael Martinez and Regina (Herrera) Martinez in Skarda, New Mexico. Robert was the eighth child out of fourteen.

Robert lived a full and happy life. Robert was a proud member of the Army National Guard and Army Reserve for seven years. Robert was a dedicated employee at Granger and Hunter Water Improvement District for 32 years. He married his sweetheart of 55 years, Margaret Ann Beals, on January 29, 1965. Their marriage was later solemnized in the Salt Lake Temple on August 14, 1969. Together they had three children, whom they are so very proud of.

Robert was a friend to all and was beloved by his community. Robert loved everyone unconditionally and always looked for a way to serve. Robert had the best sense of humor and enjoyed retelling his favorite dad jokes. One of his greatest joys was giving gifts to others with no expectation to receive anything in return. Later in his life, guests and loved ones who entered Robert’s home were guaranteed to leave with a gift of one of his favorite flashlights. Robert’s love for his family was unparalleled. One of the unique ways he showed his love was giving each of his children, grandchildren, and great-grandchildren their own special nickname name in Spanish.

In lieu of flowers, the family asks that you kindly consider donating to the National Kidney Foundation or honoring Robert’s generous nature and doing an act of service in his name.

To send a flower arrangement or to plant trees in memory of Robert E. Martinez, please click here to visit our Sympathy Store.

To order memorial trees or send flowers to the family in memory of Robert E. Martinez, please visit our flower store.