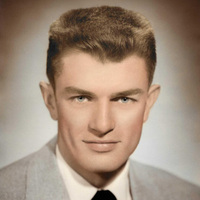 Robert Adam Duncan, son of John Charles Duncan and Laura Leona Yorgason, passed away October 12, 2021.  He was born January 3, 1933.  He was preceded in death by seven siblings and two great-grandchildren.  He is survived by his wife of fifty-nine years, Nola Kay Harris; three sons, Robert (Janet Alldredge), David (Kathleen Freeman), Bryan; his older sister Jean; as well as nine grandchildren and three great-grandchildren.

Bob was a peacemaker and a team player.  He graduated from East High School and the University of Utah.  He served a mission in the British Isles spending time predominately in Scotland.  He was always interested in watching sports on TV, as well as old ‘50s and ‘60s western TV shows.  He loved to play basketball and golf.  He was musically talented with a great singing voice and ability to play several instruments.

Bob taught at Irving Junior High and then at Clayton Intermediate.  He had an enjoyable sense of humor, always willing to share various funny poems and songs with others.  He was a dedicated provider and loved serving in various church callings.  He was a resident of West Jordan.

The family respectfully requests the wearing of masks at the viewings and church funeral service.

To send a flower arrangement or to plant trees in memory of Robert A. Duncan, please click here to visit our Sympathy Store.

To order memorial trees or send flowers to the family in memory of Robert A. Duncan, please visit our flower store.