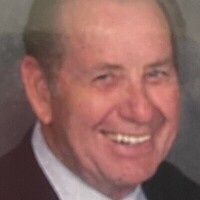 Keith was born January 26, 1932 to James and Mary Dickinson in Panguitch, Utah. He was the 5th of 9 children. He joined the US Navy and was part of the USSR Menard 201 ship serving in the Korean War. He married his sweetheart and love of his life Merrilyn Foutz, January 9, 1957 and they were later sealed in the Salt Lake Temple for time and all eternity December 11, 1964. They resided in Kearns, Utah where they raised their 3 sons.

He was an extremely hard worker and worked for many years at Kennecott Copper as an acid plant operator. After he retired from there he continued to work as a bus driver for Granite School District, a job in which he loved and they loved him.

He was a member of The Church of Jesus Christ of Latter-day Saints, and served in many various callings. He had a love for people and making them feel important.

Keith had many things he loved to do. He loved first and foremost his beautiful wife and family and was so proud of each of them. He also loved race car driving, bowling, his 1936 truck, going to car shows and parades as much as possible, and watching the Utah Jazz and BYU games, all while eating his Reese’s peanut butter cups and drinking his diet coke.

He is preceded in death by several family members whom he has now been reunited with. You will be greatly missed, but we will each see you again as we cross the finish line!

Masks are not required but are strongly recommended.

To send a flower arrangement or to plant trees in memory of Robert Keith Dickinson, please click here to visit our Sympathy Store.

To order memorial trees or send flowers to the family in memory of Robert Keith Dickinson, please visit our flower store.