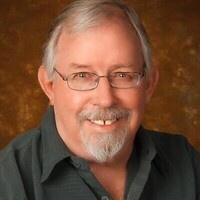 The second child of Keith Grange and Viola Peterson Stevenson.

Richard was born to be different; a black sheep in his family; a maverick in life. Richard followed not the precepts of other people; he always followed his own heart.

Richard loved his family very much, especially his parents.

Richard marched to his own drummer.

Richard always loved life and lived it to its fullest. He fell in love countless times. He loved many people, but he loved his own thoughts most of all, as they were the major, and possibly only, constants in his life. He often said that the only thing he wanted done at his memorial service, if there were one, was to have a favorite classical piece of music played. Because Richard had many favorites, choosing this special piece was very difficult. However, at the time of his death, he had chosen Richard Strauss' "Death and Transfiguration," because he felt that this short piece of music most fully described and represented his life, with all its contrast, its turmoil, its intense emotion, its final, uplifting triumph, and then dying release into the eternities. He imagined himself hovering in the air during the playing of this piece, and then slowly drifting up and away as the music came to a close. Richard suggests that anyone wanting to memorialize him should simply find this wonderful tone poem of Richard Strauss, and listen to it in memory of him.

Richard loved Europe, especially the European cities of Vienna, Paris, and Venice, and though he lived in Germany and Austria for only six years of his life, much of his heart remained there throughout all of his life. He always liked to believe that after his death his spirit would travel the world, returning afterwards to his beloved Austria or Paris or Venice, to spend a great deal of eternity there, perhaps to be reborn there as another person sometime in the future, or in the past. Richard always entertained the possibility that reality presented itself in an infinite number of dimensions and lives. The desire to believe this was obviously a result of his intense love of the beauty of the earth and of the life upon it. It would make it possible for him to continue his awareness throughout all the dimensions and eventually see everything there was to see, and do everything there was to do.

Richard truly loved his life so much that he would gladly come back and do it all over again, and maybe even better. He often said that he would do many things differently. He would definitely be wilder, more adventurous, more flamboyant, more assertive and more open about how he chose to live his life. He would be more aggressive about what he wanted to do, and try to be less lazy about it, though he valued his kick back hours about as much as anything else. He would also more openly refuse to be affected by those who regarded him as bad or even evil because of his inherent qualities and life choices, knowing that judgmental people are not worth fretting about, when life can be so much more than that.

Richard meant no harm to anyone in any way. Most people thought of Richard as a happy, good-natured, likable guy, somewhat off kilter most of the time, who somehow survived a fairly long, uncertain, always changing life, and that he lived it in pretty good style. At least, Richard, himself, thought he did.

Maybe someday you'll meet up with his soul again.

And, then again, maybe not.

Finally, wherever Richard is now, he is still thinking of you, loving you, and looking forward to meeting you again sometime in the future.

To order memorial trees or send flowers to the family in memory of Richard LeRoy Stevenson, please visit our flower store.