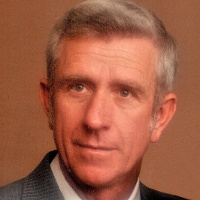 Richard Elmo Olsen, age 82, passed away peacefully on Wednesday, June 26th in his home in Magna, Utah. He was born on February 3, 1937. He was the oldest Son of 12 children. He was born to Elmo and Mildred Olsen. He was preceded in death by his father Elmo, his sister Ann, his mother Mildred, and his brother Gerald. He leaves behind his Eternal Companion Earlean Robinson Olsen in which he married in 1962 and they were married for 57 years. Children were Boyd, Leasa, Chris and Craig; many grandkids; and great-grandkids. His immediate family members were the light of his life. Richard had 6 brothers: Lyle, Gerald, Blaine, Dell, Bruce and David. 5 Sisters: Beth, Fay, Ann, Kathy, and Janet.

Richard graduated from Cyprus High School and was drafted in the Military during the Berlin Conflict and was honorably discharged from the Army. He started working at Kennecott after returning from the Army and he became a Journeyman Lineman at Kennecott where he worked for 30 years. After retiring from Kennecott, he had a short career as a bus driver for UTA; he worked for Salt Lake County Water Works, and the Salt Lake County Sheriff’s Department. He enjoyed fishing, golfing, going to Yellowstone and Montana, and of course going to BYU Football games and to the University of Utah women’s Gymnastic meets. He enjoyed having family parties at the house or wherever family had the opportunity to come together.

A special thanks to the many family and friends that came to visit him to give him hope and strength the last few months - Hospice and their wonderful group of Caregivers in his time of need.

To send a flower arrangement or to plant trees in memory of Richard Elmo Olsen, please click here to visit our Sympathy Store.

To order memorial trees or send flowers to the family in memory of Richard Elmo Olsen, please visit our flower store.