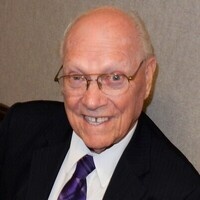 Richard “Dick” Lynis Nelson passed peacefully and surrounded by his family in his home on April 6, 2022 in West Valley City, Utah. He was born on March 31, 1936, in Salt Lake City to Francis Carl Nelson and Myrtle Ellen Ashliman. He graduated from South High School in 1954. He married Jacklynn Scarlet in the Salt Lake Temple, June 6, 1955. After 36 years, he retired from Unisys in 1995 and experienced the joy of raising his youngest three children. He faithfully held many positions for The Church of Jesus Christ of Latter-day Saints. This included temple service and over 40 years of indexing and family history work with his wife. Together, they served four missions; Uganda, Albania, Croatia, and Salt Lake West.

He was an avid golfer and loved to read. He took his family on many vacations throughout the United States and Mexico. The family favorite is the annual Bear Lake reunion. World travels included a month in Switzerland, visits to Greece and Italy, the Rome Temple open house, and cruises to Hawaii, Alaska, the Mediterranean, and Antarctica/South America.

Preceded in death by his parents; five brothers; four sisters; and son-in-law.

The family wishes to express their appreciation to all of the healthcare providers and hospice workers for their diligent service to Dick during the past few years.

To order memorial trees or send flowers to the family in memory of Richard Lynis Nelson, please visit our flower store.