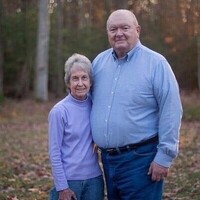 Richard Clair DeLong passed away on January 16, 2022, in his home at the age of 85. He is survived by his wife, Bonneta DeLong, and 5 of his 7 children, Richard Jr, Ronald, Theresa, Clifford, and Steven. His sons Martin and Troy preceded him in death, as well as his only sibling, Jackie Vetere. Richard and Bonneta were blessed with 17 grandchildren and 9 great-grandchildren.

Richard was a faithful member of The Church of Jesus Christ of Latter-day Saints since joining the church in Naval Boot Camp in San Diego shortly after his marriage. He served in many callings including Bishop and High Counselor.

Following bootcamp Richard spent the next 37 years in the U.S. Navy. At 18 years of enlisted service, he finished his degree and selected for officer candidate school, becoming a "Mustang." The next 19 years he spent as an officer, finally retiring as a Commander in the Navy. Richard did two tours at sea, one on the USS Tarawa and the other on the USS Saratoga.

After retirement from the military Richard moved to Utah where he went back to school and received his master’s degree from BYU in Public Administration. He worked for a period of time for the State of Utah Employment Services helping veterans find jobs before finally retiring for good. After leaving the workforce he and Bonneta were called to serve two missions for the church, one to Missouri and the other to Washington State.

He loved genealogy, working in the yard, football, Hawaii, shopping, and traveling to his hometown of Alamosa Colorado visiting relatives. And of course, he loved his family and his dear wife of 65 years, whom he cared for tenderly until the day he passed.

To send a flower arrangement or to plant trees in memory of Richard Clair DeLong, please click here to visit our Sympathy Store.

To order memorial trees or send flowers to the family in memory of Richard Clair DeLong, please visit our flower store.