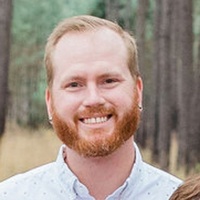 The irreplaceable Tyler Ballou, beloved husband, son, brother, and uncle, passed away on March 19, 2020, in Salt Lake City, Utah, at the age of 31. Tyler had a zest for life! He loved his husband, family, friends, and pets and had a remarkable musical talent.

Tyler was born in Logan, Utah, on July 15, 1988. He was a musical prodigy and was playing Beethoven at age 9 after only a few months of piano lessons. He graduated from Madison High School in Rexburg, Idaho, in 2006 where he was a passionate accompanist for the Bel Cantos Choir and school musical practices. He was an Eagle Scout and served as an organist for The Church of Jesus Christ of Latter-day Saints. He had a reputation for shocking the members of the Rexburg 16th Ward when he would rock the organ!

After high school, Tyler attended BYU in Provo, Utah, where he studied organ performance for one year. He performed many organ concerts and held organist positions at St. Luke’s Episcopal Church in Idaho Falls, Idaho, and St. James’ Episcopal Church in Midvale, Utah. He was widely recognized and admired for his performance ability.

Tyler was married to Josh Davis on August 12, 2017, at St. James’ Episcopal Church. Together they enjoyed spending time with friends and family, as well as their three dogs, Pepsi, Mia, and Pebbles.

Tyler was a lineman for Comcast and could figure out or fix almost anything technical. With an insatiable need to learn, Tyler became an expert on many subjects through self-directed informal study, including famous organs of the world, submarines, dams, and the Titanic.

Tyler was a caring person who made friends easily and had a fun sense of humor. He loved traveling and cruising with his family. He will be greatly missed.

He is survived by his husband, Josh; his father, Rich Ballou (Kristin); and his mother Susan Marchant (Scott); his siblings, Cassity Clay (Jordan), Aurora MacDonald, Mandy Marchant, and Preston Marchant (Amanda); his nephews, Keenan Clay and Zakkary Marchant; and many aunts; uncles; and cousins. He was preceded in death by his grandparents, Dick and Jane Ballou; and Grant and Stella Harris.

Because of the COVID-19 virus, a celebration of life for Tyler will be held at a later date. His interment will be in St. Anthony, Idaho, at the Riverview Cemetery.

To send a flower arrangement or to plant trees in memory of Tyler Ballou, please click here to visit our Sympathy Store.

To order memorial trees or send flowers to the family in memory of Tyler Ballou, please visit our flower store.