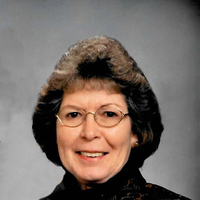 The family of Rhea Stoddard is sad to announce that Rhea died on Wednesday, September 9th after fighting her fourth cancer. Rhea said she had a good life for 80 years and was tired and “done”. She was ready to meet up with her husband Milt.

Rhea was born in the Hansen Maternity Hospital in Roosevelt, Utah on March 11, 1940 to Donna Brough and Wayne D. Pickup. She was the oldest of three kids. At the time Rhea was born, the Uinta Basin was “almost a frontier”. Rhea talked about going on cattle drives at age 5 and staying in a sheep wagon on the Green River for the whole summer.

Rhea went to school in Fort Duchesne. She would stay with her grandparents during the week so she could get the school bus. She then went to the Avalon school when it opened.

Rhea’s family moved to Randlett when her dad was almost drafted during World War II. Rhea said he wasn’t drafted because he was already doing an important job being a rancher and a farmer. She loved growing up in Randlett. She talked about skating on Pelican Lake in winter, rode horses all year, helped with cattle drives in the spring and fall and hiked. Rhea also said that she loved that her best friends were also her cousins.

Rhea went to Union High School in Roosevelt, Utah where she fell in love with Melton (Milt) Stoddard. They had known each other since third grade. They got married on May 8, 1958. They were sealed in the Salt Lake Temple on her birthday in 1969. Rhea and Milt moved to Salt Lake City in 1959 and had three kids – Marv, Julie and Hap.  In 1965, Rhea and Milt bought the house where she continued to live. Rhea always talked about how many friends she made over the years. She has been friends with some of them for 55 years!

Although Milt was a truck driver and gone frequently, Rhea always talked about what a good life she had. She said that she never wanted for anything. She would often talk about the vacations she took with Milt and her parents. She felt blessed that they were able to do those trips.

Rhea and her younger sister Carma were also very close; they went everywhere and did everything together. Carma died in 2008. Rhea was able to take care of Carma at the end of her life.

Rhea became a Medical Assistant in 1974.  She worked as an MA until 1997.  She said she was going to retire 3 years before that but she wanted a new car, so she kept working.

Rhea was very active in The Church of Jesus Christ of Latter-day Saints. She did everything from Primary teacher to Primary President, Cub Scout leader and worked for many years in the Temple. She always talked about the great friends she made at church.

It was commonly said that Rhea was one of the nicest people on Earth. She was also very tough. She survived three types of cancer. The fourth one was just too much for her to take.

Rhea is preceded in death by her parents; sister; and husband. She is survived by son Marv (Kathleen); son Hap; daughter Julie; and unofficially adopted daughter Susan. Rhea also leaves behind her brother Pete (Joan); 5 grandchildren; 9 great-grandchildren; 2 great-great-grandchildren; is blessed with more extended family than we can count and many, many friends.

Rhea was cared for by Dr. Martha Glenn and staff for many years. Rhea loved Dr. Glenn. We are all thankful for the many extra years we got to spend with Rhea thanks to Dr. Glenn.

Instead of flowers, please consider a donation to the Huntsman Cancer Institute.

To send a flower arrangement or to plant trees in memory of Rhea J. Pickup Stoddard, please click here to visit our Sympathy Store.

To order memorial trees or send flowers to the family in memory of Rhea J. Pickup Stoddard, please visit our flower store.