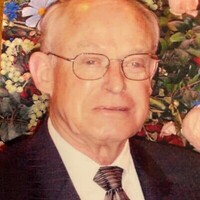 He was known as Varlin by a few, as Reed to many, as Dad to Alisyn and Sharon, as “Bompa” to Erin, Elise and Connor, as Papa to Jenise, Ty and Jayson, and as Uncle Butch to the Burrows kids.

Varlin Reed Babcock died on June 21, 2021, surrounded by those he loved and those who loved him.

Reed was born in Lapoint, Utah, on November 20, 1931, to John Reed Babcock and Eva Fern Rasmussen. His mother died when he was 5. His stepmother Colenso Farrimond taught him neatness and order. He grew up in Salt Lake City, loved all sports his entire life and was an enthusiastic Cougar fan.

After high school, he served for four years in the US Navy, including service in Korea. Then he served as a missionary for The Church of Jesus Christ of Latter-day Saints in the Western Canadian Mission. He graduated from the University of Utah and worked for Varian Medical Systems (now Varian, Inc.) for more than 30 years.

Reed married his Canadian girl, Elaine Selk, in the Logan Temple in 1962. They welcomed four baby girls into their lives. Two of them, Kristine and Shannon, lived only 11 months. Alisyn and Sharon grew to be wonderful women.

He was a lifetime active member of the Church and fulfilled his various callings faithfully. He and Elaine were ordinance workers at the Jordan River Temple. He also served as a missionary at the Family History Library.

He bore his afflictions patiently and endured well to the end.

He is survived by his wife, Elaine; beloved daughters Alisyn Rogerson (Ken) of Durham, North Carolina, and Sharon Broadhead of Magna, Utah; 6 grandchildren and 3 little great-grandchildren.

Services may be attended virtually at:

He will be laid to rest at Larkin Sunset Gardens, 1950 East 10600 South, Sandy, alongside his two baby daughters whom he so tenderly cared for.

Heartfelt thanks to loving friends and neighbors, who have given help and support over the years.

Grieve not because a good man died.

Men die; it is the way of life and must be borne.

Rather, rejoice because a good man lived.

To send a flower arrangement or to plant trees in memory of Reed Babcock, please click here to visit our Sympathy Store.

To order memorial trees or send flowers to the family in memory of Reed Babcock, please visit our flower store.