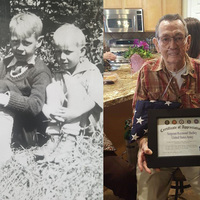 Raymond Jason Shelley, our beloved husband, father, papa, grandpa, and pillar of strength, passed surrounded by loved ones on February 29, 2020.

Ray was born in Glencliff, New Hampshire on May 5, 1930 to Sidney Shelley and Glenna Hunt. Ray took to hard work from a very young age. As young as 7, he would help his father at the bobbin mill. At age 17, he enlisted in the United States Army. He became a sergeant and was stationed across most of the world. He served his country in the Korean War.

After his time in the military, he moved to Hannibal, Missouri to be near his brother John and his wife Margie. From there, he began working as a long haul truck driver. Trucking is what brought him to Utah. While in Utah, he met his lovely wife Lileth Steggell. They were married on April 28, 1972. He then adopted Lileth’s youngest daughter Michelle and gained 3 other children Stephen, Kevin, and Kathie. He was also like a father to his granddaughter Tiffany.

Ray’s many hobbies included going camping, fishing, and hunting with his family and friends. He also enjoyed working on cars and “piddling” around his garage. He had a talent for making all sorts of crafts which included: lamps, wood projects of all kinds, latch hook rugs, and even knitting. He also loved spending time with his family at BBQs and birthdays. He enjoyed weekly outings for lunch with his friends and playing card games, which he almost always won everything he played.

He is preceded in death by his parents; brother; and sister-in-law.

The family would like to extend a gracious and special thank you to CNS Nursing and Hospice Services, especially Craig, Matt, Jimmy, Yvonne, Melissa, Lindsey, and all the many others that cared for him over the years. You were absolutely wonderful, and we really appreciate all of your compassion and love.

In lieu of flowers, the family would ask you to please donate to CNS Hospice.

To send a flower arrangement or to plant trees in memory of Ray Shelley, please click here to visit our Sympathy Store.

To order memorial trees or send flowers to the family in memory of Ray Shelley, please visit our flower store.