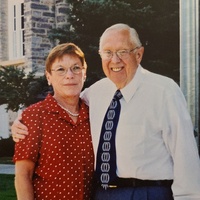 Patsy Haws passed away peacefully December 3, 2020 at her home surrounded by loved ones. She is now reunited with the love of her life. Ted Haws.
Patsy was born February 28, 1939 in Chicago, Illinois, the only child of Stanley Leroy Nelson and Okileen Chapman. She was raised by her mom and stepfather Frank Dorak whom she considered her dad.
Patsy met her eternal sweetheart Otto S. (Ted) Haws in Lincoln Nebraska at her parent’s restaurant while he was serving in the military. They were married March 18, 1955 in Lincoln; later solemnized in the St. George Temple.
Together they had five children, Douglas (deceased) (Julie), Lisa Jones (Jeff), Randy Haws (Debra), Sherri Fenstermaker (Chuck), Steven, and  Patsy's sister, Cathy Wilson (Jon deceased), whom they raised.
Mom received her Bachelors degree in English and Library Science from the University of Illinois later working for Sangamon State University in Springfield, Illinois and the University of Utah in the library department. Later in life she became a business owner as a floral designer which she loved.
Patsy was a faithful member of the Church of Jesus Christ of Latter-day Saints serving in many different callings including young women and Jordan River Temple worker.
Patsy is survived by four children, her sister, thirteen grandchildren and twenty-four great grandchildren. She is preceded in death by her husband, Ted; son Douglas; her parents; and her brother in law, Jon.
We would like to thank all those who helped with Patsy’s care especially Simbii Home Health, Tia And Jasmine.
There will be a viewing Wednesday December 9, 2020 from 6:00 to 8:00 at McDougal Funeral Home, 4330 S. Redwood Rd. The family will have a PRIVATE graveside dedication on December 10, 2020 at 12:00 at Utah Veterans Cemetery.

To send a flower arrangement or to plant trees in memory of Patricia Ann Nelson Haws, please click here to visit our Sympathy Store.

To order memorial trees or send flowers to the family in memory of Patricia Ann Nelson Haws, please visit our flower store.