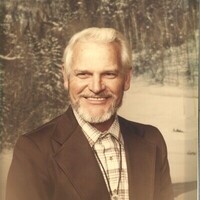 Marty was born in St. George to Leland A. Martineau and Nellie Slack. He lived in Gunlock, Utah until his teen years and moved to Salt Lake City & Cottonwood Heights, where he resided the rest of his life.

Marty graduated from West High School & enlisted in the US Air Force. He was stationed in Shreveport, Louisiana & later in Puerto Rico, where his job was Aircraft Crash Rescue & Fire Fighter. During that time, he never did attend to a plane crash or put out much more than practice fires, so he had a bit of spare time. He  got to spend it honing his fishing skills in the oceans  & lakes.  It  was a fisherman’s paradise for him.

Marty later attended Trade Tech in Salt Lake City, where he studied his lifelong work as a car mechanic.

He married Barbara Sorensen in December 1954. He was 24 & Barbara, barely 17, when they eloped to Elko, NV with another couple.

Marty worked for Laury Miller where he became acquainted with Bill Madsen. After Bill got his own gas station & mechanic service center, Marty went to work for him. They “lived life in the fast lane” for years on a racing team. “Wild” Bill, the expert driver, with Marty along with other team members, building and keeping their Super Modified race cars winning several championships between 1957 thru 1972 at the Salt Lake Fairgrounds speedway. After the fairgrounds racing shut down, the team raced at Suntana Raceway in Springville. The racing team often ventured out of town and into Canada, sometimes bringing all the kids along.

Marty was an avid game hunter & fisherman and a very good cook. He learned at an early age how to field dress a deer & butcher it to get the best tasting meat. Over the years, he butchered countless deer for his friends and took part of the meat for his efforts.  He made the best jerky & his breaded & sautéed venison was legendary as it would melt in your mouth. He perfected a recipe he called Brandied Salmon Flambeau, & it  was always fun to watch him light the brandy in the cream sauce, making a huge flame.

After Marty retired, he was done with galivanting & content to stay put at home & pursue his hobbies. He loved reading, gardening, woodworking, fishing, cooking delicious Sunday dinners. He wrote many amazing short stories of his early life & adventures.  He made hundreds of beautiful birds for gifts to his family & friends & also sold countless to Backyard Birds Giftshop.  He took this time to cultivate wonderful friendships with the neighbors & his nephew Leland Martineau, who was very special to him. Marty loved to lend a hand whenever he could. He considered these neighbors as his extended family & he was literally surrounded by their love & companionship. The Ballous, Petersons, Johnsons, Morrises, K Jamison & Scott, & The Blacks, have been so supportive & have shared theirs tears, sympathy, beautiful flowers, healing meals & their precious time spent visiting with us.  It means everything to Barbara & our family & we would not have gotten through these sad days without these priceless neighbors & friends.

Marty was a loving and devoted husband to Barbara for 66 years.

The Greatest Pa to Ray, Vaughn, & Kimber, and his daughter in Heaven, Jana V. who died shortly after birth.

The Martineau family would like to express our deepest and heartfelt gratitude to the Hospice team from Intermountain Health, for their kindness & compassion during the last few weeks of Marty’s life. Counselor Pearson, Chaplain Doug & Nurse Meghon, who took care of Marty, were so thoughtful & always available to lend an ear & ease an anxious mind. Thank you for making our lives so much more bearable during this difficult time.

Love you always & forever. Goodbye until meet again on the other side

To send a flower arrangement or to plant trees in memory of Oral "Marty" Ray Martineau, please click here to visit our Sympathy Store.

To order memorial trees or send flowers to the family in memory of Oral "Marty" Ray Martineau, please visit our flower store.