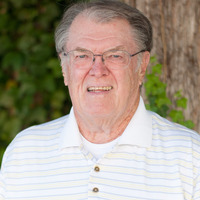 On February 26, 2022, the man, the myth, the legend, our husband, father, grandfather & great-grandfather, Odine Neil Christianson, passed away peacefully at home  surrounded by his loved ones. Odine was born in Cando, North Dakota on September 18, 1939, to Arnold V. and Avis K. McDougall Christianson. During his childhood, Odine moved frequently and finally settled in Salt Lake City, Utah. His childhood was spent in the Fairmont Park area where he loved and excelled in boxing and baseball. He graduated from South High School and attended the University of Utah. He married Sharon Crockett and to that union were born two wonderful sons. They later divorced. On January 26, 1966, he married Sherry Knight and on January 27, 1979, they were sealed in the Salt Lake Temple and became an eternal family.

Odine spent his career working in the electrical industry where he garnered many great and lifelong friends. He was a man who gave many years of service to his church and to the youth of his community. His heart and his passion turned to coaching and he spent over 40 years in the paint on the basketball court, at home plate on the baseball field, and in the end zone of the football field with hundreds of youths and his own three sons. To many he was more than a coach. He was a friend and a father-figure. The youth had his heart.

Odine gained a great love of the Polynesian community and through love and mutual respect, he embraced two more sons, Iloa Vakapuna and Ron Tongaonevai, who became part of his family. He was everyone’s hero.

Football was his life, whether on the field or in front of his TV. He was a great Steelers fan and a rabid University of Utah football fan. His heart remains with the youth of the Hunter and Cyprus areas.

Odine was a member of The Church of Jesus Christ of Latter-day Saints, serving in many callings, including Bishop of the Hunter 9th ward. He taught each of us so much through wise words and example. We will treasure all we learned from him and strive to make him proud.

Odine had 17 grandchildren and 17 great-grandchildren whom he loved and was so proud of each and every one of them. They were his pride and joy.

He is preceded in death by his parents; his step-father John (Arthur) Davis; his in-laws; 2 sisters, Vonna Lou Wolfgang and Shirley Rae Johnson; his son Scott Baxter; as well as a grandson Kyle Harvey; and a great-grandson Hudson White.

The family wants to express extreme gratitude to the staff of Harmony Home Health Care, Jamie Miller, Levy Suarez, Laurie Smith, Crystal Leaman and Cretia Stallings for their loving care of our husband and father.

Services will be streamed through zoom:

Meeting ID: 965 0982 9450
Passcode: 479221
To order memorial trees or send flowers to the family in memory of Odine Christianson, please visit our flower store.