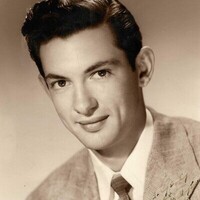 Norm (Jake as he was known to family and friends) passed away June 11, 2020 of causes incident to age. He was born in Saugus, MA on February 27, 1931. His family moved to Utah and settled in Taylorville in 1935 where he grew up. He was the third of four boys born to George Whittier and Minnie Malvina Suttie Tarbox. Always a proud 11th generation New Englander he was a Red Sox and Patriots fan to the end. He attended Plymouth Elementary and Junior High Schools, with a brief stint at Granite High School.

Jake left school and enlisted in the United States Navy on his 17th birthday. He became a radio operator aboard the USS Sperry (AS-12), a submarine tender and flagship for Submarine Flotilla One, based in San Diego. This was the beginning of his lifelong career in the field of communications. While in the service Jake graduated from San Diego Evening High School. With the outbreak of the Korean War in June of 1950, his enlistment was extended by President Truman. He and his sweetheart, Pat Thompson of Holladay, decided to marry following her graduation from Granite High School. They were married June 15, 1951 in the Salt Lake Temple the day he graduated from high school. Thus, began their extended honeymoon in San Diego while awaiting his discharge from the military in March 1952.

A big fork-in-the-road decision was thrust upon them at the time of his discharge. His boyhood dream was to be the ‘boy singer’ with one of the big bands of the day. He was presented that opportunity with the Frankie Carle Orchestra that was about to begin a national tour. They decided that it might be better to use the GI bill and pursue an education foregoing his boyhood dream. He subsequently earned BS, MS and PhD degrees from the University of Utah and Syracuse University. He worked at television stations in New York, Iowa and Salt Lake City. In 1960, while working for KUTV in Salt Lake he was asked to join the faculty of Brigham Young University. He was a co-founder of BYU’s television station and BYU Broadcasting. He taught in the Speech/Theater and Communication Departments for 33 years, retiring in 1993. He delighted in working with the students and helping them launch their careers, many becoming his lifelong friends and associates. In 1990 he was presented the KBYU-TV ‘Pioneer Broadcasting Award,’ the KBYU Broadcast ‘Visionary Award’ in 2000, and in 2009 their ‘Lifetime Achievement Award.’

Upon retiring from BYU as Professor Emeritus of Communications he, along with Pat and their daughter Diane, served a full-time family history mission for the church. He spent a great deal of time doing genealogy and temple work for his ancestors. He worked on his own personal history over the years, resulting in a memoir written for his family and his posterity, in the hope that they might learn from his mistakes.

He performed over the years in local and church venues. He also returned to the recording studio to record some of his own vocals of big band, jazz and blues music. Late in life he also returned to the stage to perform in various musical theater productions, primarily with Rogers Memorial and CenterPoint Legacy Theaters - no big roles, just ensemble and cameo work. He loved the rehearsals, being with the other cast members and the performances; but most of all he loved the joy, the smiles, the tears and the laughter he saw in the faces of the audience. His final performance was at the age of 86.

The immediate family will hold a private memorial service to express their love and honor his life. He will be interred at Redwood Memorial Estates Cemetery, West Jordan.

To send a flower arrangement or to plant trees in memory of Norman Carlyle Tarbox, please click here to visit our Sympathy Store.

To order memorial trees or send flowers to the family in memory of Norman Carlyle Tarbox, please visit our flower store.