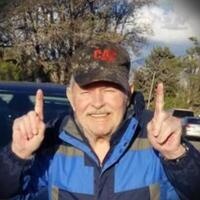 Norman T. Dodge graduated from this earth to his next adventure on August 4th, 2021 after a long hard battle from his stroke on June 18th, 2021.

Norman was born in Whitaker Pennsylvania on Dec. 31st, 1941 to Norman and Ester Dodge. He was raised with his five siblings in Munhall, Pennsylvania.  After graduating high school he married Patricia Hertz in 1961 until 1974.

In 1963 Norman Joined the United States Army and served as a Private First Class E3. While in the Army he received a medal for Good Conduct, a Marksmanship Badge (Rifle M-14), and an Honorary discharge in 1969.

After Norman's service in the military he worked at Homestead U.S. Steel Mill until 1976.  He was then transferred to Geneva Steel in Utah.  After arriving in Utah, Norman met "Lupie" in 1977 and they were married two years later in 1979.

Norman loved outdoor adventures; his favorite activities included camping, fishing, hunting, and going shooting. He also loved going to the movies often and going out to play pool with his boys.

Norman was known for his adventurous spirit and his kindness, not only to his wife and friends, but to his children, his stepchildren, and even his children half-sibling.

Norman is preceded in death by his parents Ester & Norman; his sibling's Grace, Duke, Tommy, Jack, and Sandy; and by his baby daughter Kathleen.

He is survived by his wife of 42 years Lupita; his children Jim, Johnny, Lorrie, Bob & Renee; His 12 Grandchildren, and his 11 Great Grandchildren.

To send a flower arrangement or to plant trees in memory of Norman T Dodge, please click here to visit our Sympathy Store.

To order memorial trees or send flowers to the family in memory of Norman T Dodge, please visit our flower store.