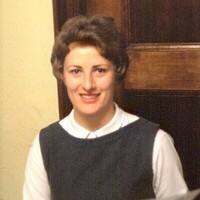 While growing up in McCammon, Idaho, Nola was active in 4-H and band.  She graduated from Marsh Valley High School and then Brigham Young University in Education.  She later taught at an elementary school and eventually English at West Jordan High School and Salt Lake Community College.

Nola and Robert were married on May 31, 1962 in the Salt Lake Temple.  They made their life together in West Jordan and raised three sons.  Robert preceded her in death by 3 months and 3 weeks.

Nola loved music and taught piano lessons for decades.  She was a dedicated homemaker.  Each week while her boys were young, she baked fresh bread.  She also canned lots of fruits and vegetables grown by her husband, to help economize.   She had a good sense of humor and was frequently joking around about something.

She willingly served in various church callings, including in her younger years as Ward and Stake Relief Society President, and in various music-related positions throughout her life such as Ward Choir Director.  She had a love for family history, loved sharing stories about her ancestors, and could frequently be found at the Family History center.

She was a long-time resident of West Jordan and participated in various organizations such as Community Council, the West Jordan City Planning Commission and helped to write the history of the city.

She is preceded in death by her husband, Robert; two great-grandsons; and her parents.

We thank healthcare professionals at Intermountain Healthcare as well as friends, family, and neighbors for their kind service to Nola.

So that all might feel comfortable attending, we respectfully request the wearing of masks at the services.

The funeral will be viewable online via the 28th Ward stream of the West Jordan Utah Stake's YouTube channel:

To order memorial trees or send flowers to the family in memory of Nola Kay Harris Duncan, please visit our flower store.