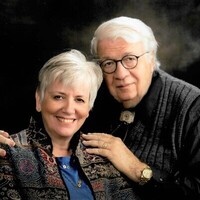 Mike was born in California. He was a twin, but his brother Richard died after three weeks. Mike used to say that Richard saw what life would be like with the two of them and decided to return home to heaven. Mike felt that his brother was a guardian angel in his life.

Mike graduated from high school in California and then decided to join the Navy. During his service he spent most of his time in the Philippines. He had a great passion for photography and hoped he would be able to pursue that in the service. Unfortunately, he was out ranked and lost that opportunity. When his service was finished, Mike decided to serve his Father in Heaven and was called to the Central States Mission. His served was shortened by some kidney problems.

Following his dreams of photography, Mike decided to enroll in the Brocks Institute in central California to receive his degree in photography. He married and it took several years to complete his schooling because he was working to support a family too. That marriage ended in divorce. He married again to Sharon Fulkerson and they had three children, Justin, Kristen and Shanin. That marriage ended and he moved to Salt Lake City to work for KSL filming commercials. After two years, because of a reduction in workforce, Mike decided to go to Logan for additional education. There he got a master’s degree in Instructional Technology. While in Logan he met his wife, Kris; they attended the same singles ward and met at a Halloween dance. After four months, they decided to get married and eloped to Elko, Nevada. They returned to Logan and spent a year and a half finishing school, then onto Ogden where they both had jobs.

After two years, they moved back to Salt Lake City and once again both worked. For ten years, Mike taught woodshop in the Junior high schools. Next, he moved to high schools to teach computer graphics. During that time, he also taught photography for many years at the University of Utah, one class a semester.

Services can be viewed virtually at: https://vimeo.com/event/1657836

To order memorial trees or send flowers to the family in memory of Michael Dennis Rice, please visit our flower store.