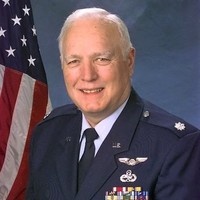 Eugene loved singing, photography, riding motorcycles, hunting, drawing, and working with electronics. He was also a licensed HAM radio operator. Eugene worked at the University of Utah in the psychology department for 30 years, building computers and contraptions for the department. He served in the Utah Air National Guard for 40 years, eventually attaining the rank of Lt. Colonel and commanding the 130th Electronics Installation Squadron. Most recently, he enjoyed searching the internet for recipes of all sorts and testing them in his spare time (for better or worse). He loved sharing his findings with all those around him as a way of giving back to the community.

Funeral services will be held at 11:00am on Monday, December 16, 2019, at the Glenmoor 6th Ward Meetinghouse of The Church of Jesus Christ of Latter-day Saints located at 4200 West Skye Drive, South Jordan, Utah. A public viewing will be held from 6:00-8:00pm on Sunday, December 15, 2019 at McDougal Funeral Home, 4330 S. Redwood Road, Taylorsville, Utah. There will also be a viewing one hour prior to the funeral services at the meetinghouse. He will be laid to rest in the Utah Veterans Cemetery and Memorial Park in Bluffdale, Utah.

To send a flower arrangement or to plant trees in memory of Eugene J Izatt, please click here to visit our Sympathy Store.

To order memorial trees or send flowers to the family in memory of Eugene J Izatt, please visit our flower store.