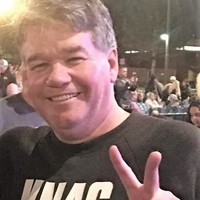 Michael was born on May 9, 1964 in Hollywood, CA to Ronald James Plunkett & Winnifred Taggart.

Michael graduated La Jolla High School in San Diego, California in 1982.  After high school he loved to travel, including traveling to follow his favorite bands; including but not limited to, KISS, Iron Maiden, Ozzy, Guns N' Rose, Van Halen, Motley Crüe, and Cheap Trick. He worked for the airlines and would often travel to shows even out of the country.

Michael saw and did many amazing things in his life, but his greatest accomplishment and his pride and joy was his daughter Alexandra Michael Plunkett. He was excited about her name because her initials spell "AMP" which he joyfully called her before she was born.

In his younger years he relocated from California to Eden, Utah. He later moved to Salt Lake City and then settled in Toele, Utah.  His career included working at the Oaks Restaurant in Ogden, Utah and The Ogden Airport and then settling into a job working for the airlines. Michael  "lived" for doing reservations for MANY years at Continental Airlines and United Airlines  where he made lifelong friends and would often have people request him to take their  reservations because he would talk to them and make them feel like family. He was good at it and people all over the world loved him and would send him cards and praises for being so kind to them. Prior to his death he was working at a school with disabled children, which he enjoyed very much.

His hobbies included watching football in general but he lived for his beloved San Diego CHARGERS, his love of all things airplanes, building model airplanes with his dad and traveling.

He is preceded in death by his father Ronald James Plunkett. He leaves behind his mother Winnifred (Bob) Lauer in CA; his sister Brooke (Gary) Marow in CA; his daughter Alexandra Michael Plunkett, Kearns, UT; and MANY special friends, co-workers, customers, and neighbors that he adored and loved.

A special thanks to McDougal Funeral Home.

To send a flower arrangement or to plant trees in memory of Michael James Plunkett, please click here to visit our Sympathy Store.

To order memorial trees or send flowers to the family in memory of Michael James Plunkett, please visit our flower store.