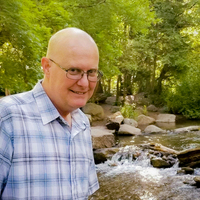 Merlin Roy Dye, age 59, passed away in his home on April 4, 2022. He was surrounded by close family members who loved him dearly. We rejoice that he has been freed from the suffering caused by Early Onset Alzheimer’s Disease.

Merlin was born on November 9, 1962, in Idaho Falls, Idaho. He was the 5th son born to Stanley Clark Dye and Daveen Hill. His family was joined by an additional brother and three sisters following Merlin. He was raised by goodly parents who taught him the principles of the gospel of Jesus Christ. During his youth he enjoyed camping with his immediate and extended family and engaged in adventurous activities such as motorcycle riding, skydiving and rock climbing.

Merlin married Sheri Hight in the Salt Lake Temple on September 11, 1984. They had been neighbors and friends for years but didn’t truly discover each other until Merlin was home from his mission and Sheri was out of high school. They were blessed with two sons, Christopher, and Daniel.

He remained an active member of The Church of Jesus Christ of Latter-day Saints throughout his life. He served a full-time mission in Rome, Italy. Many of the church positions he held involved youth and scouting. He had an especially fulfilling experience serving in the Branch Presidency of the West Ridge Academy where he assisted troubled teenagers in the residential treatment facility.

Merlin’s profession was performing field service in the telecommunications industry. He spent more than 20 years at Tri-Tel Communications where he installed business phone systems in existing structures and new construction. He forged friendships there that have continued to this day. Later in his career he worked with fiber and participated in business networking.

Merlin was adept at all things technical and mechanical. He could fix literally anything, the more intricate the better. He operated ham radios and enjoyed target shooting as a hobby. He collected pens and unique lighters. He taught his children to be gentlemen and modeled service to others. He demonstrated how to care for pets, tools, guns, electronics and gadgets of all sorts. Most significantly, he set the example of loving care for their mother.

Merlin's trials included significant health challenges and he faced them with faith and courage. He experienced renal failure and received a kidney transplant from his brother, Stanley, in 2003. He was diagnosed with Stage 4 Cancer in 2011 and completed successful chemotherapy. He overcame the renal failure and the cancer, but there was no way to overcome the Alzheimer’s that was diagnosed in 2019.

Merlin was preceded in death by his mother, Daveen, just 7 weeks ago; and by his sister Kathy.

He is survived by his loving wife, Sheri; their sons Chris (Cami) and Danny (Rachel); and his beloved grandchildren, Tessa, Logan, Wyatt and Connor; his father, Clark; his brothers, Michael (Barbara), Rodney (Natty), Stanley (Kathy), James (Cynthia), Ricky (Lisa); and his sisters, Cheryl (Tim) Nukala, and Kristi (Troy) Bolinder. Merlin is also survived by many nieces and nephews that thought he was the best uncle ever.

A viewing will be held on Friday, April 8th, from 6:00 to 8:00 pm at the Prairie 10th Ward building of The Church of Jesus Christ of Latter-day Saints, 7337 So Grizzly Way, West Jordan, UT. A viewing will be held at the same location on Saturday, April 9th beginning at 10:00 am and followed by the funeral at 11:00 am. Interment will be at the Riverton City Cemetery.

Those who would like to participate in the service remotely are invited to join the live broadcast at https://zoom.us/j/94425255661

To order memorial trees or send flowers to the family in memory of Merlin Roy Dye, please visit our flower store.