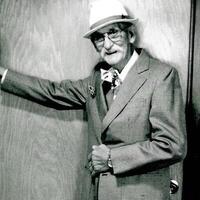 There’s happiness in Heaven today for those who have been waiting for the “Bow Tie Guy”. But the one who is happiest is the one whom he loved the most, His beloved “Butch”.

Though we will miss him he will want each of us to carry on living the three “Loves” he taught us “Love of Family”, “Love of the Gospel of Jesus Christ” and “Love for life”.

He was taught the value of hard work and earning an honest living from his parents and family. He in turn taught those values and correct principles to his family and everyone with whom he associated throughout his life. He learned that whatever you have been blessed with, use it until it’s no longer useful then try to do something good with it.

Occasionally on weekends, he and his older brothers would go fishing and he became a pretty good fly fisherman. When his older brothers (Howard and Wally) moved to California to find work he and his younger brother Jay teamed up to drive stock cars. Dad’s specialty was the Demolition Derby and we got to help him prep the cars he would use and once got to go to a race at the fairgrounds with him and Mom.

He joined the United Sates Navy in 1943 as a Torpedoman Third Class and served on the USS Stemble during the final months of World War II. He always talked proudly of his time in the service and shared one experience of being stuck in a torpedo tube while cleaning it out, which is one of the causes of his claustrophobia. His deep love for “America” was put on display each day he flew the American Flag on the flagpole in his front yard and whenever he wore his Navy Veterans hat proudly and often. He was especially honored when he received a flag from Alliant Techsystems, HighTech Structures facility for him to fly. On December 17, 2019 “Community Nursing Services” arranged for him to receive a “Certificate of Appreciation” from Captain Todd Vandergrift of the US Navy, a United States Navy Veterans pin and Medal of Honor. They also

performed “The meaning of the 13 Folds” of the United States flag and presented the flag to him in a special storage case.

He married the “Love of his life” Sherma Bowen, January 17, 1948. In 1966 they were sealed for all eternity in the Salt Lake Temple. He loved to talk about his dating experience when his best friend dared him to give Mom a kiss on their first date. Well he took the challenge and was immediately smitten, twitter pated, true love’s first kiss!! The whole fairy tale experience!! He knew right then that he wanted to marry her. After dating for a while, which was a long range relationship, he lived in Salt Lake City and she lived in Magna, they decided to elope and headed off to Evanston, Wyoming to get married with his best friend who just bought a new car. It’s important to remember that in January of 1948 there wasn’t a 4-lane freeway going to and from Salt Lake to Evanston. It took nearly 2+ hours each way. After arriving there, the Justice of the Peace asked Mom how old she was. She was 18 at the time and he said she had to have Grandma’s permission to get married. Well a long distance ($.75 cents back then on a dial phone) phone call to Magna, Utah and a very interesting conversation with Grandma Bowen resulted in a marriage that endured 68 years of companionship, trust, commitment, dedication, and love. They drove home and arrived early in the morning at Grandma and Grandpa Moser’s house and headed downstairs. Grandma was waiting up for him like she always did and said, “Where do you 2 think you are going.” Dad said downstairs to bed.” Grandma said, “You’re not living together until you get married!” That’s when Dad explained that they had gone to Evanston and got married by the Justice of the Peace and showed Grandma the marriage certificate. Some at the time said Mom wouldn’t graduate from High School, but Dad made a promise to Grandma Bowen that he would do everything he could to see that she graduated with her class. They would get up every morning, travel from Salt Lake out to Cyprus High School in Magna and made sure Mom got to school and no-one was prouder than Dad and Grandmas when she walked across the stage and received her diploma.

After his time in the service had ended, he returned to Salt Lake City and resumed working at Booth Fisheries/Ocean Beauty for the next 55+ years. He started out in the fish bay and eventually worked his way up in the company and retired in sales. When he moved from the fish bay to the office sales position, he felt like he needed to look more professional so he began his long standing tradition of growing a mustache and wearing “Bow Ties”. In January 2017, Dan Rascon, at the request of Bishop Shawn Wilson, did an “Inside the Story” on KUTV about ‘The Bow Tie Guy’. Grandpa has introduced that story to everyone he meets and is willing to listen. This would then provide him with an opportunity to share his life’s experiences and testimony of the Gospel. Also during that time, he worked several second jobs doing custodial work at the church for 20 wonderful years, at his work office and 6 years at Taylorsville High school which was a real treat for him because that’s where some of his grandchildren went to school.

Then as life and family was moving along, he and Mom decided it was time to focus on the family and getting active in The Church of Jesus Christ of Latter-day Saints. It didn’t take long before he and mom were called to serve, Dad in the Young Men’s Mutual Improvement Association (YMMIA) and Mom in the Primary and Relief Society where they served wherever and whenever the Lord extended a call and dedicated themselves completely to each calling, often times at the same time and supported each other no matter what it required. He served in the Ward Activities Committee, Stake Activities Committee, Ward YMMIA President, Counselor and President of the Stake YMMIA, Stake High Councilor, Ward Clerk (20+ years) for Floyd Herlin, Henry James, Glen Smith, Wayne Fawson and Dirk Porter. Bishop Porter then called him to be his Executive Secretary and he served as Executive Secretary for Paul Slack, Shawn Wilson and Gene Folker until Bishop Folker was released recently. His love for these

men and his commitment to fulfill his covenant to give all to the building up of the Kingdom of God was one of the greatest lessons to his family and anyone who knew him.

His love for the temple was manifest as he attended the Salt Lake Temple frequently and when the Jordan River Temple was built, beginning in 1996, he would attend the 1:00 PM session every week on Tuesday afternoon. When he finally retired, he started going to the 5:00 AM session on Tuesday morning where he developed cherished and eternal friendships with the ordinance workers and patrons. After each session he would come home and record the name, birthdate and date of each person he had the privilege of performing ordinances for and the date it was done. Can you imagine how many of those spirit brothers were grateful to see him pass through the veil and thank him for completing their work so they could continue on with their lives!!

Throughout his life he taught us correct principles, the value of hard work and giving service to others.

We extend thanks and deep appreciation to the many caretakers who have provided devoted attention and care during the last few years of his life: the doctors and nurses at the Veterans Hospital - especially Dr. Tiffany Volden and PJ Jennings. The doctors and attendant specialists at the Moran Eye Clinic, especially Dr. Shakoor. The doctors, nurses, and attendant specialists at the Intermountain Medical Center. The specialists and physical therapists at Legacy in Taylorsville, especially Jagoda and Dave McMullen. Dan Rascon and his “The Bow-tie Guy” story on KUTV; your story helped him spread the Gospel by opening up doors of conversation. Gayle Miller, Nancy and the Utah Jazz floor personnel who assisted Dad at the only Jazz game he attended in February, (Denver of all teams which we lost). Megan and other staff from CNS (Community Nursing Services). And very special thank you to Shellie from CNS (Community Nursing Services) who tolerated Tweety with each visit but on the last visit was able to let her land on her shoulder for just a minute. It brought a smile to his mustached face. And finally to, McDougal Funeral Homes and Memorial Estates.

To send a flower arrangement or to plant trees in memory of Max Leslie Moser, please click here to visit our Sympathy Store.

To order memorial trees or send flowers to the family in memory of Max Leslie Moser, please visit our flower store.