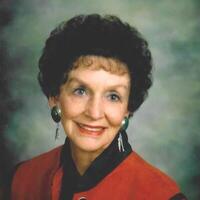 It was a clear, sunny, peaceful day in Taylorsville when the spirit of Mavis Lynnette Hickman Steadman, age 95, returned to heaven on April 17, 2021.  She was a wife, mother, grandmother, great-grandmother, great-great-grandmother, actress, teacher, friend and neighbor who lived an exciting and dramatic life. Mavis was the first child of Harry and Mae Hickman, born into this world by a midwife in the family home on April 8, 1926 in Tooele, Utah. Her brother Bart and sister Cheri were born later. She began taking piano lessons at about age 8, and was a prodigy, entertaining people at church and family events. She was baptized a member of The Church of Jesus Christ of Latter-day Saints and confirmed by President Heber J. Grant. The family moved to Ogden, then Salt Lake City. Mavis attended East High School and worked on the school newspaper, the Red and the Black.

During World War II, Mavis worked at Hill Air Force counting nuts, bolts, and screws. She attended UCLA and the University of Utah and graduated with a teaching certificate in speech and English in 1947. Later during a teaching sabbatical, she returned to the University to pursue a master’s degree in school counseling. Her love of drama took her to the stage of the Salt Lake Theatre where she played the role of a southern belle in “First Lady”. At the Lyric Theatre she met Stanley Glen Steadman, who also loved the theatre and whom she would marry in the Salt Lake Temple August 15, 1949 by Elder Mark E. Peterson, upon Stan’s return from the Eastern States Mission.

Children arrived in their home amidst the directing of plays and Stan’s singing with the Tabernacle Choir. In order to join Stan, or Juggy as they affectionately called each other, and the Choir on their 1955 eight-week concert tour of Europe, Mavis sewed 100,000 pair of fashion doll pants for .15 cents each on a sewing machine she won from writing a winning jingle:

The colors are bright

The price is conveniently low.

For a finer fabric

They built their dream home in Taylorsville on property purchased from Stan’s father.

In 1962, Stan was involved in a terrible car accident from which it took him years to recover. Mavis used her teaching degree to support the family of six children and taught for 24 years in Granite School District at Kearns Junior, Kearns Senior, and Eisenhower Junior High Schools. She wrote, directed, and produced hundreds of dramatic productions for classroom, school programs, the Utah Education Association, the school district, and the Utah Board of Education. Mavis was named Utah’s Teacher of the Year in 1968. She was the recipient of the first All Church Distinguished Service to LDS Drama award, a Limelight Award, Golden Apple Award, and the Teacher Citizenship Award from Granite School District. The University of Utah honored her with the Merit of Honor Award through the Emeritus Alumni Association in 1998.

Service in The Church of Jesus Christ of Latter-day Saints was a significant part of Mavis’s life. She was regionally known for her winning roadshows that got even the most grumbling members of the ward to sing and dance, answering her rehearsal requests for, “One more time.”  Her work was featured at Church June Conferences and in a film on how to produce roadshows. She directed Stake plays, talent shows, and was known for her Christmas and Easter readings. She also performed a one-woman show based on the life of Emma Smith. Mavis’s Gospel Doctrine lessons were faithfully and artistically given on Sundays for more than eight years.  With Stan, she served in the Brisbane, Australia Mission, promoting the Church’s participation in the 1988 World’s Expo. Later the couple served a humanitarian mission to Hanoi, Vietnam. While there, she and Stan produced Handel’s “Messiah”.  She later served as a hostess at the Joseph Smith Memorial Building.

She actively participated in her community, producing Tombstone Tales twice in the Taylorsville Cemetery and helped found the Taylorsville Arts Council. Her writing was included in “The Christmas I Remember Best” hardback book. She performed with the Babcock Performing Readers.

She was preceded in death by her parents; Stan; her brother Bart; and grandsons Quinn Steadman and Matthew Beckstrand.

The family would especially like to thank Mavis’s sister Cheri, who has provided competitive shopping experiences, adventures, and loving companionship for the last several years. The staff at Inspiration gave sweet hospice care in her last few months.

A viewing will be held on Friday, April 23rd from 6:00-8:00 p.m. at McDougal Funeral Home, 4330 South Redwood Road. An additional viewing will be held Saturday, April 24th at the River View Ward, 4845 South Woodhaven Drive from 10:30-11:30 a.m. prior to the funeral. Funeral services will begin at noon in the chapel. Interment will follow at Elysian Burial Gardens.

If roadshows exist in the after-life, the choruses of Heaven are already learning the Broadway show tune, “Step to the Rear” and perfecting their step, behind, step, kick moves at Mavis’ request of, “Just one more time.”

To send a flower arrangement or to plant trees in memory of Mavis Hickman Steadman, please click here to visit our Sympathy Store.

To order memorial trees or send flowers to the family in memory of Mavis Hickman Steadman, please visit our flower store.