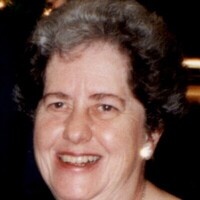 Maurine Stimpson Evans passed away on February 9, 2021 at the Sagewood senior living community in South Jordan, Utah surrounded by her husband and family. She had been a resident of West Jordan, Utah since 1990 and was a former resident of Riverdale, Utah; Washington D.C.; Silver Spring, Maryland; and Rockville, Maryland where she raised her family.

Maurine was born on February 13, 1934 in Ogden, Utah, the youngest of eight children born to Mary Emeline Allen and Joseph Henry Stimpson.  Her family moved to Washington D.C. on Decoration Day, May 30, 1941 where, in her own words, “We arrived in Washington expecting to stay only a short time, certainly just until the end of the World War II, or for the ‘duration of the war’ as we often said, but as will be shown the urge to stay was irresistible and father and mother remained even after his retirement from the FBI and the marriage of all his children”.

She attended schools in Riverdale, Utah and Washington D.C., obtaining her high school diploma from Roosevelt High School in 1952. She continued her education at Brigham Young University where she met her future husband.

Maurine married John David Evans in the Salt Lake City Temple, in Salt Lake City, Utah on June 17, 1954.  The couple moved back to Washington D.C. where Maurine obtained employment at the Department of Agriculture as a Clerk-Stenographer.  She left her position to start her family.  Together she and John had seven children.

Maurine was a member of The Church of Jesus Christ of Latter-day Saints where she served in many positions throughout the years, including Ward Relief Society President.  She served as pianist or organist for church meetings in every congregation she attended from an early age until just a year before her death.  She had a great faith in her Savior Jesus Christ and a strong testimony of the truthfulness of His restored gospel.

Maurine enjoyed traveling and was able to visit six different continents and numerous countries.  She was a talented seamstress and handicrafter making many of her daughters’ dance dresses, sewing quilts and blankets and knitting special gifts for newborn grand and great grandchildren.  She enjoyed playing, arranging and listening to music with a special fondness for songs from Broadway musicals and for church hymns, but was most fond of spending time with family.  She was a beloved friend, wife and loving mother with a wonderful wit and infectious laugh.

Maurine was preceded in death by her parents, two brothers Allen and Eldon Stimpson, and sisters Inez Mash and Mary Jordan as well as one brother and two of her sisters who died during or shortly after birth.

Maurine’s family would like to express their gratitude to the staff of Sagewood at Daybreak for the care and attention she received during her time there.

Those wishing to view the funeral proceedings for Sister Evans may join virtually through the following link.  The funeral will begin at 1PM on Monday February 15th. We ask that you not record any part of the funeral.
Join Zoom Meeting
https://zoom.us/j/95514861196?pwd=aDZ1Z1lyY25iUHZJaW0zaE1yc0ZLQT09

Viewing and memorial service will be held at:

To send a flower arrangement or to plant trees in memory of Maurine Stimpson Evans, please click here to visit our Sympathy Store.

To order memorial trees or send flowers to the family in memory of Maurine Stimpson Evans, please visit our flower store.