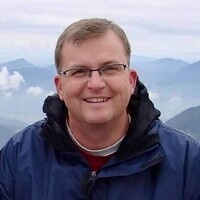 Matthew Martin Allred, loving husband, father, son, brother, uncle, and friend passed away peacefully at his home on September 19, 2020 surrounded by those he loved most in the world. Matt’s passing follows a valiant battle with brain cancer. Matt was born in Salt Lake City, Utah to Merle Lee Shore and Charles Martin Allred on July 14, 1966. He was joined by his younger brother, Curt, two years later. He spent most of his growing up years in Kearns, Utah. He graduated from Kearns High in 1984, where he loved to play football. After his graduation he attended Utah State University for a year before serving his mission to Argentina for The Church of Jesus Christ of Latter-day Saints. He had a great love for the people of Argentina and spoke the language so well they would often ask if he was a native. Matt graduated from the University of Utah in 1993 with a degree in Business Management. He later went back to school and in 2012, received his Master of Business Administration.

Matt married Noelle Layne Holladay, the love of his life, on March 28, 1991, and was sealed for time and eternity in the Jordan River Temple. They were later graced with three miracles, Madison Layne (24), Abigail Leigh (21), and Carter Martin (14).

After living for a time in Utah, a job offer gave him the chance to move his little family to Southern Oregon in 1998, where he went to work for Rogue Valley Medical Center. Matt and Noelle had a deal that they only had to live in Oregon for one year and then they could go home to Utah. They completely fell in love with Oregon and the amazing people there. Oregon provided them many fond memories, experiences, and friendships they will cherish forever. Five years ago, Matt had the opportunity to work for University of Utah Healthcare and moved his family back home to Utah. He loved being close to his extended family once again and being near the mountains he loved as a child.

He loved football, especially watching his favorite team, the Utah Utes. He was a tried and true Ute fan! He even took it upon himself to improve his BYU supporting friend’s lawn with a lovely mowed outline of U of U, it was something he took great pride in. Matt loved to laugh and joke and had a fabulous sense of humor. He had a large personality and was easy to be around. He was always up for any activities; a weekend trip, playing games, serving others or spending time with family and friends. Matt loved his family more than anything. He loved supporting his children in any activity or sport they were involved in, from piano lessons to soccer and basketball games to musicals and graduations, he was ever-present in his children’s lives.

He had many admirable traits that we love and will miss greatly. He was hard-working, generous, funny, kind, smart, and loved to visit with people. He had a way of making them feel like the most important person in the world, a true gift. He never ceased to amaze and surprise his family.

Matt served in and was a life-long member of The Church of Jesus Christ of Latter-day Saints. He served faithfully in various callings over the years and was given the opportunity to serve as Bishop of his West Jordan ward for the last 5 years of his life, which he thoroughly enjoyed.

He was preceded in death by his father Charles “Mart” Martin Allred.

To send a flower arrangement or to plant trees in memory of Matthew Martin Allred, please click here to visit our Sympathy Store.

To order memorial trees or send flowers to the family in memory of Matthew Martin Allred, please visit our flower store.