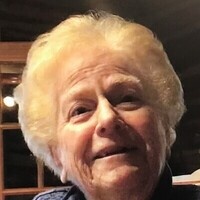 Marjorie Knowlden stepped through the veil late January 18, 2021 while holding hands with her dear husband of 67 years, George Knowlden , and son, Leo. She was able to greet her son, Michael who had brain damage at birth, and got to reunite with her son as she never was able to here on earth. We’re sure her sister, parents and dear friends were part of the celebratory greeting party.

Marjorie was born in Chicago, Illinois and move to Watsonville, California when 9 years old. It was there that she developed a testimony of Jesus Christ, studied, and grew in knowledge, danced and met her husband. George and Marge met while he was stationed at Fort Ord, California when he was ordered to attend a Gold and Green Ball with The Church of Jesus Christ of Latter-day Saints. With few girls and many soldiers in attendance, George did all he could to monopolize her time. Not long after, without dating at all, George felt inspired that Marge was to be his eternal companion and proposed. Marge tried to tell him she didn’t know him well enough to answer, but what came out of her mouth was, “Yes.” When George was given sudden orders to transfer across the country, they were married in less than a week in the Salt Lake Temple in June 1952. While George received his military training, Marge lived with her sister, Arlene, in Provo, Utah until they could start their time as man and wife.

Michael Knowlden was born while Marge and George were stationed in Ft. Campbell, Kentucky. Deprived of oxygen at birth, they were later to discover that it had left him profoundly intellectually handicapped. Mike passed away at the age of 19 years. After moving back to Salt Lake City, Marge and George had 2 more children, Becky and Leo in the next 2 years. Lynne was born 3 years later. It was years later that they found out the reason Lynne needed so much help with hearing, vision and learning. Marge had been exposed to rubella during her pregnancy and it cause development damage to Lynne.

Marge worked for Sperry Rand/Univac/Unisys from 1959-1992, working her way up from key punch operator to the first female Systems Analyst in the nationwide company. Unasked, one colleague shared that Marge was the best at synthesizing a solution for complex software issues he had ever met. She was professional, bright and a real credit to the team.

Marge showed the value of education by going back to college after retiring to complete her Bachelor of Fine Arts/Printmaking. She enjoyed past times of artwork, interior decorating, sewing, crafting, creating, writing her personal history, fulfilling her church callings and travel. Marge and George have traveled to Europe, Egypt, Israel, Argentina, Patagonia, the Amazon, Mexico, Alaska, and most of the United States.

Marge often went about doing quiet service. She volunteered for the 2002 Olympics and helped for nearly 4 years before and after the actual event. She knit and crocheted for charity making bandages, hats, infant blankets and burp clothes. In fact, she rarely sat in front of the TV without having her hands busy.

Her testimony of Jesus Christ and the gospel was pivotal in her life, although she kept her thoughts and ideas mostly to herself. She filled every calling that she received in The Church of Jesus Christ of Latter-day Saints with her full ability even when it took her way out of her comfort zone. In her retirement years she served two missions, one to Puerto Rico on the island of Vieques and the second in West Valley City as a service Missionary in a Spanish Branch. It’s humorous that she served among Spanish speaking people for over 4 years and never learned the language. She would write talks, have George translate them to Spanish, write the diacritical markings to pronounce each word correctly, practice giving the talk and finally, when she had mastered the talk, she would let the Branch President know that she was ready to speak.

Even during the final months of her life, when her health was declining and her earlier stroke had made processing information difficult, she still studied her scriptures daily. She even commented that it seemed all new as she read the Book of Mormon again.

Not too many people have ever gotten to know the depths of Marge’s heart as it was hard for her to share it, yet she was loved, and her influence reaches far and wide.

Marjorie is celebrating a life well lived on the covenant path. She endured to the end, continuing to do her bit to serve. She is loved and will be missed. It will be wonderful, in time, to join her on the other side of the veil.

Preceded in death by:

“She was an amazing woman who taught me a lot about being a women of faith. I pray

that I live a worthy life and be able to see her again.”

“Marge was such a creative and amazing person.  The last time I spent time with Marge

was at George’s 90th birthday party.  For a period of time, all the Knowlden and Tesch

family members were engaged in the program, running around, moving from one task to

the next, having little time to visit with me.  Seeing me sitting alone, Marge sat down

next to me and we conversed for the next thirty minutes.  It was wonderful to have this

one-on-one time with her.  And this is how I remember Marge, insightful, kind, and

To send a flower arrangement or to plant trees in memory of Marjorie Ellen Albach Knowlden, please click here to visit our Sympathy Store.

To order memorial trees or send flowers to the family in memory of Marjorie Ellen Albach Knowlden, please visit our flower store.