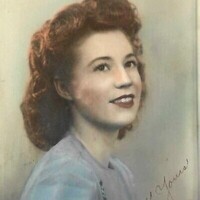 Lois Twitchell Kimber (96) returned home to her Heavenly Father on January 11, 2022 at the home of her daughter, Cindy Fortin, in Kaysville, Utah.

Lois was the second child and only daughter of Leland and Melba Twitchell.

Growing up was difficult for Lois. Her father was often absent. The family was poor and relied on the generosity of extended family members. Melba died when Lois was only nine years old, and the children were sent to live with relatives. They lived in different homes but there was a special bond between them. She loved her brothers deeply.

She married Viril J. Kimber on March 12, 1945 in the Salt Lake Temple. Because he was stationed in England during World War II, their courtship was mostly through letters. He proposed in a letter and sent the ring in the mail. The Kimber family accepted her warmly, which she always appreciated.

Lois and Viril were blessed with five children, Sherry, Chauna, Joan, Cindy and Kelly (the long-awaited son). They were supportive parents and tried to attend their children’s activities. Kelly was involved in sports and Mom was a vocal supporter! She was also a BYU fanatic and cheered for them heartily.

She was a faithful member of The Church of Jesus Christ of Latter-day Saints, serving in various callings in Primary, Young Women and Relief Society. Lois and Viril were often a team in their church service as ward and stake dance directors, missionaries in Guam and Tallahassee, Florida and temple workers. Lois continued to serve after Viril’s death and retired after 28 years of serving in the Jordan River and Ogden Temples. She felt guilty that she had difficulty doing genealogy work and expected a heavenly reprimand for not doing it while she overlooked the more than 500,000 records she had indexed.

She was an exceptional seamstress. With four girls, her sewing machine was always busy. Every school year, each daughter started the school year with five new dresses and every Christmas each child received homemade pajamas and a new outfit.

Lois loved her friends and family and was delighted when children, grandchildren and friends stopped by for a visit. These visits often included an intense game of SkipBo. She was never one to “let” others win. As her health declined, one of her favorite pastimes was her daily SkipBo with her dear friend, Bonnie Bigelow.

Mom, we send you home with our love and thank you for your faithful example and testimony. We will try to live to fulfill your desire to be a forever family.

The family wishes to thank Sun Crest Hospice for their compassionate care.

To order memorial trees or send flowers to the family in memory of Lois Twitchell Kimber, please visit our flower store.