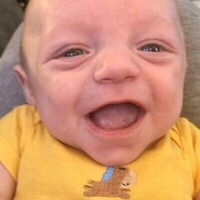 Baby Logan Michael Ward, 8 months, passed away unexpectedly in the early hours Monday, February 22, 2021 in the comfort of his dada’s arms.

Logan came into this world eight weeks early weighing 4lbs 2oz and was a fighter from the very beginning. One hour after being admitted into the Neonatal Intensive Care Unit he adamantly removed his own oxygen tube and never needed it again. The NICU nurses were constantly amazed at his progress during his time there. Logan graduated 35 days later and was finally able to come home to meet his big brother and other family members.

There were no strangers to Logan as he openly accepted and smiled at everyone he met. However, he saved his biggest smiles for his hero and brother Joshua.

Logan brought much joy and fulfillment to his family and there are countless fond memories of our sweet monkey that will be remembered. His 7-year-old brother Joshua was very proud of his baby brother and often reminds people that Logan was born early because he couldn’t wait to meet his big brother.

He quickly became known to have more hiccups than any baby ever, and his mom would joke that he was born with hiccups because he had them so often even before he was born. Logan was very enthusiastic about eating from the first moment he began nursing. He would drink his bottles with gusto and as solid foods were introduced, mom and dad could not spoon food into his mouth fast enough. Logan had just cut his first tooth the Saturday before he passed and was eager to try whatever foods mom and dad were eating. Logan was strong and active and amazed his parents at his ability to start moving around the house, by launching himself forward after getting a rocking head start on his knees. His parents were enormously proud and will always remember his first word ‘dada’, followed shortly by ‘dog’.

Logan’s life was an amazing gift to us that will live on as his heart valves were donated to those in need.

He is now in the loving arms of his many family members who have passed before him.

Logan Michael Ward, thank you for the unconditional love, smiles, and laughter you brought to our lives. You will never be forgotten and will be in our hearts always.

Due to COVID we do ask that those who attend please wear a mask. If you have been sick, around someone with symptoms, or are unable to attend for other reasons, we will be hosting the services Live through Zoom Meetings. The link can be found below:

Proverbs 27:1 - “Do not boast about tomorrow, for you do not know what a day may bring forth.”

To send a flower arrangement or to plant trees in memory of Logan Michael Ward, please click here to visit our Sympathy Store.

To order memorial trees or send flowers to the family in memory of Logan Michael Ward, please visit our flower store.