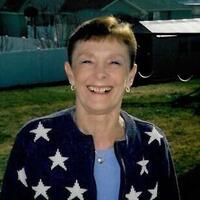 At the age of 3, she contracted Polio which affected her legs, crippling her. As a child, she underwent many years of surgeries on her legs and was placed in the Iron Lung many times. After all the surgeries, she was left with one leg shorter than the other, one foot smaller and a fused ankle. But at school she was still one of the fastest girls on the playground, even with her crutch. She was determined to walk until the day she died, and she did just that, her will and determination was fearless.

Her childhood was spent in Cedar City, Utah. There she met her very best friend of 76 years, Charlotte Rowberry. They were the 2 troublemakers on 800 West from preschool on. She and Char were quite the "get into everything" type of girls; let's just say they had a lot of fun.

When Linda was 15 her mother Cora passed away on Thanksgiving and her father remarried the following March to Rhea who had recently lost her husband to a lightning strike. So together, Norm and Linda and Rhea and her daughter Kathleen, age 3 merged their two families together. In September 1956 as a sophomore in high school Linda decided to move to California to live with her Aunt Ferris and Uncle Ray. This would prove to be a wonderful move for her after losing her mother. She graduated from Whittier High School in June 1958.

She returned home to Cedar City after graduation and upon turning 18 she married "the only boy she wasn't related to in town". On August 22, 1958, John "Jack" Robert Wood and Linda Heaton became husband and wife. They lived in Germany for a few years while Jack was in the service and then returned home to Cedar City. Their first child Lance was born in October 1961. In 1962, the Leigh Hotel in which they were living caught fire and they lost everything but each other and their baby son Lance. They decided to move to Southern California and start over with Jack working in the Aerospace Industry. They lived in Redondo Beach, California for 5 years where their daughter December was born. They moved to Long Beach, California where they made their home with their 2 children. Linda was a stay at home mom who took great care of her children. She was very supportive in all their activities. She also loved to clean and vacuum, dust, clean walls, mopped and still had dinner on the table at 5:30 sharp. As the kids grew older, she was asked by a dear friend to come to work with her at Ryan's Pharmacy as a Pharmacy Technician/Cashier. She decided to do it and for many years loved working that job.

Jack passed away unexpectedly in 1995 leaving Linda a widow at the young age of 54. She moved to Utah a year later and settled in West Jordan, Utah for 20 years until she came to live with her daughter due to some health issues.

Her quick wit and fun personality along with being quite the character will be missed by so many. She always made those around her smile and feel special.

She is preceded in death by her husband John "Jack" Wood; her parents Norm, Cora and Rhea Heaton; and just recently her best friend Charlotte Rowberry.

She is also survived by her brother Tom (Stacey) Heaton; and 4 sisters, Kathleen (Dave) Noah, Vickie (Roger) Empey, JoAnn Heaton and Sharon (Tom) Bryson. Also survived by 2 wonderful ladies that are as much her daughters as her own children, Nanette Batty and Terri Rosenberg.

The family would like to thank Dr. Farrukh for the care he gave to our mom over the past 15 years. He and his staff Kathy have been amazing. Wade, Denise, Tonya and Cheryl at Therapy were her greatest cheering squad. In the last weeks Aubrey and Rosie at Harmony Hospice have been wonderful.  Before Mom's passing, she said she couldn't wait to get to heaven so that she could run through the grass without her shoes, something she hasn't been able to do since she was 3. Dr. Farrukh would say to her "Life is Good", and so it is.

There will be a graveside service on Saturday, September 26th at Noon, after which she will be laid to rest in the Cedar City Cemetery in Cedar City, Utah.

To send a flower arrangement or to plant trees in memory of Linda Heaton Wood, please click here to visit our Sympathy Store.

To order memorial trees or send flowers to the family in memory of Linda Heaton Wood, please visit our flower store.