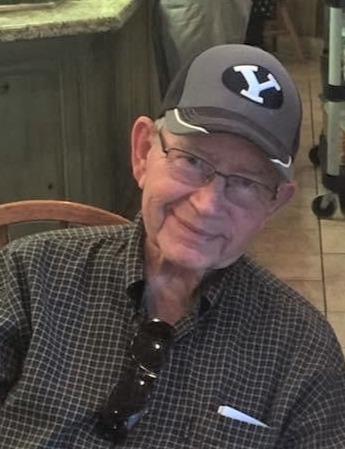 Leon was fond of saying, “I don’t want to go to Heaven if I can’t play basketball.” For the past few years health stopped this beloved father, grandfather, brother, husband, uncle and friend from continuing any more physical activities. Growing up as a young man he played the sport he loved most, basketball. This was his niche in life. Along with hard work and a natural ability, he had a talent for the game. A good mix of ambition and coaching helped propel him into becoming a great high school and collegiate athlete. In fact, he loved the sport so much that while in middle school he got into trouble with his father for cutting school to attend a high school basketball game. This was particularly troubling because his father was the coach.  We can only hope that he will have the chance to play the game he loved so much in the next phase of his eternal existence. Leon Davis Mecham passed away Monday, June 6, 2022.

Luckily, Leon was greeted in heaven by his precious loved ones who preceded him. We can only imagine how that reunion transpired, first he would have been reunited with the love of his life and the mother of his children, Patricia. They were finally back together to share in God's eternal plan. Then being able to hug his parents Onan and Nola grateful for the lives they lived. Next up would be the meeting with his beloved sister Rhea, and then sharing a special moment with his grandson Justin, who was taken from this life too soon. All of them are enjoying the blessings of their new eternal state.

Leon was born on January 19, 1936, in Salt Lake City, Utah. He served a mission to Sydney, Australia where he was invited to have dinner with the Ehmann family. On the other side of the table there was a beautiful girl, Patricia Florence. At the time they had no idea that this was the beginning of a long love affair. Later while both were attending Ricks College, Patricia was at a basketball game and thought that Leon was an arrogant and overconfident athlete. She wasn’t impressed by his flashy three pointers. Well that all changed when they met at a church function. They began to get to know one another, and the rest is history. Leon and Patricia were married and sealed for time and all eternity in the Idaho Falls, Idaho Temple on February 3, 1961.

Leon may not have been able to continue his basketball career or cultivate all his physical talents after an unfortunate knee injury, but after meeting the love of his life Patricia, the two of them found a new ability that they were extremely good at. Leon and Patricia were just like rabbits, busting out kids like they were the owners of a birthing factory! You must hand it to them, the scripture does state that we are to “multiply and replenish the earth” well for that they get an A++. Hence, the beginning of a big family with 8 awesome kiddos.

A highlight in Leon's time at Ricks College was playing basketball against BYU. After a severe knee injury while playing another sport at Ricks, he forever became a BYU sports fanatic. He purchased season tickets for BYU football and basketball games and started his collection of BYU paraphernalia. It literally littered his house. The only problem is that several of his kids went to the University of Utah. So, if someone bought him a BYU futon, then he also got a Utah futon. If someone got him a BYU blanket, very soon he would get a Utah blanket. This became a fun ongoing rivalry in his family, one that is still raging. He was a good sport for allowing Utah fan gear in his house.

Leon was generous in all aspects of his life, while working as a part-time mechanic, he met a member of the notorious biker gang Hells Angels. They were passing through Salt Lake City and needed some work done on their bikes. Leon had the brilliant idea of inviting them to spend the night. Patricia lost her marbles when a gang of Angels rode up to the house and started pitching their tents on the front lawn. Although this was probably a bad thing to do without confiding with your wife… from that point on his kids thought dad was a real rebel.

Leon was a successful painting contractor. He was able to build a company that survived several economic collapses. It was obviously stressful during the down years, as he would have to find alternative means to care for such a large family. One year while working he had a bad fall and broke his back. This was an extremely hard time because Leon was a giver. When food started showing up at the doorstep, he asked his family to give it away to those that needed it more than him. His older kids took over his company and kept it afloat while he recovered from the injury. This was the kind of lesson that he taught his kids and grandkids. He believed it is much better to give than to receive.

Although most of you knew Leon as a friendly quiet man, he did have a mean streak when it came to following the rules. I am sure this was an inherited trait from his father Onan. If one of his kids came home past curfew and tried to sneak in the house undetected, they were guaranteed to see a silhouette of a man at the end of a dark hall. It was at that time you realized Leon could still physically kick your rear end, as he literally would all the way to your room until you learned a lesson.

Leon loved his kids and wanted the best for them. He worked extremely hard to provide them with the best life he could. Leon's generosity spilled over to his grandkids. He had a tradition to give all the grandkids a dollar at the family gatherings. He would have them come up to him one at a time so he could give them a big hug and kiss. The grandkids loved him; they created a game called the Grandpa-in-the-Middle. Looking back, it seemed quite silly. But the grandkids would literally put Leon in the middle, circle around him while holding hands, then skip along while chanting “Put the Grandpa in the Middle”.

Leon would struggle financially at times because his heart was bigger than his pocketbook. He couldn’t help himself, but if he had the means he would literally help convicts with a job and furniture, struggling neighbors, church members, and family with groceries. He had a wish that those who knew him would be compassionate, kind, and generous. He lived this way. He wouldn’t accept payment if someone didn’t have the means. He was often taken advantage of, but he didn’t care, he felt confident that this was God’s plan for him.

Leon loved taking his family on long drives, making them hash browns with fresh Idaho potatoes, as well as attending all their activities. Keeping the family unit together was a big part of his life. He truly believed that families are forever and taught each of his kids and grandkids this. Well that belief would soon be tested. On December 18, 1995, Patricia passed away from a long struggle with brain cancer. It was extremely difficult for Leon to find the comfort he needed. He really struggled. His kids tried to keep him busy attending various activities. Then Darlene (the matchmaker) stepped up and introduced Leon to Marva Cohen. They quickly fell in love. There was one small catch for this relationship to work…Leon would have to double the size of his family. We all know that Leon has no problem adding more people in his life, so Leon and Marva were inseparable until he recently passed away. Marva had a special place in Leon's life. Those that saw them together knew this. She brought him tremendous joy and he loved her very much. Till they meet again.

Leon had faith and love for his Lord and Savior Jesus Christ. He faithfully lived a Christ centered life and enjoyed seeing his posterity succeed physically, socially, spiritually, and academically. He was proud to serve his Heavenly Father. He was honored to bless, baptize and confirm his children. He was kind, caring and loving. His legacy of hard work, kindness and putting family first lives on. We will all miss his sweet and consistent goodbyes as he told us “I love you, you are a sweetheart and you are special”. May all your glory be bestowed upon you Dad!!

A viewing will be held Friday, June 17th between 6-8pm, and Saturday, June 18th (Patricia’s birthday) between 9-11am at McDougal Funeral Home, 4330 South Redwood Road, Taylorsville, Utah 84123. A private family graveside service will be held after the Saturday viewing.

To order memorial trees or send flowers to the family in memory of Leon Davis Mecham, please visit our flower store.