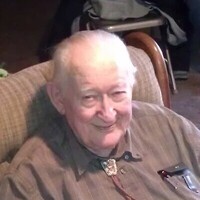 Lenvel Elbert Drain was called home on October 18th, 2021, at the age of 91 years old. He was born February 22nd, 1930 to Sherman and Ruby Drain. Lenvel was born into a large family, including ten siblings: Sherman, Johnny, Ed, Harold, David, Herman, Vivian, Betty, and Jewel.

As a young adult, he moved to Utah, following his brothers before him. Lenvel obtained work quickly, working in the foundry in Kennecott Copper Corporation in Magna, Utah.

Lenvel was extremely hard working and stayed with Kennecott for 30 years. After a hard day’s work, Lenvel would get food at one of his favorite restaurants in Magna, and it was there that Lenvel met the love of his life, Carol.  Carol’s father owned the restaurant, and Carol was a waitress

there. The two were married on December 4th, 1950 and later sealed in the Temple of The Church of Jesus Christ of Latter-day Saints in 1962. They were married for nearly 65 years, only separated by Carol’s death in 2015. The couple had three daughters: Leanna, Deborah, Jo Ann. Aside from being a hard worker, Lenvel was a very creative and caring man.

He loved to play instruments, particularly his guitar, and enjoyed listening to country music. He loved those around him deeply. He had a smile that welcomed every person who saw it, and made everyone he met feel at home with his warm demeanor and big bear hugs.

Lenvel was also a deeply spiritual man, always keeping the spirit of the Lord close by his side. We know that he was welcomed with loving embraces by those who passed before him including his parents and many siblings, as well as by his loving wife, Carol, and his daughter, Leanna.

To send a flower arrangement or to plant trees in memory of Lenvel Elbert Drain, please click here to visit our Sympathy Store.

To order memorial trees or send flowers to the family in memory of Lenvel Elbert Drain, please visit our flower store.