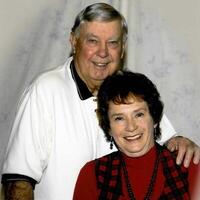 Lee Winslow, age 92, passed away February 26, 2021 at his home in West Valley City, UT with his loving wife, Bea of 64 years, by his side. He was born October 23, 1928 in Ventura, CA to Eldon Kermit Winslow and Mary Louise Jeanne Ouellette.

Lee went to High School in Carmel, California and was a five Sport Letterman, graduating in 1948. He enlisted in the Navy and served in the Korean War as a Radio Operator in the Navy Air Corp. He played tennis in the Navy and won the All-Navy Tennis Championship.

He married Beatrice Johnson on November 23, 1956 and became a TV Repairman. He was well known in the community for his red “Lee’s TV” van driving around town and parked at Meadowbrook Golf Course. He enjoyed bowling and had a perfect 300 game. He also loved golfing and had 9 hole-in-ones.

Lee Winslow will be buried at the Utah Veterans Cemetery.

To send a flower arrangement or to plant trees in memory of Lee Winslow, please click here to visit our Sympathy Store.

To order memorial trees or send flowers to the family in memory of Lee Winslow, please visit our flower store.