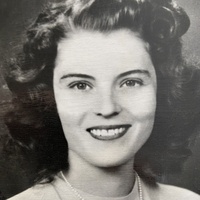 The world lost one of its great cheerleaders on February 15, 2022, as LaWana Moss finally got  her wish to go home.

LaWana was born November 24, 1926, in Salt Lake City, the oldest of Joseph and Clara  Mortensen’s 13 children. As the oldest, she helped raise them as she attended Cyprus High School. After graduation she caught the eye of executives at ZCMI and was hired as a model. She worked while attending school to become a dental assistant, an experience that made her value education and encourage her children and grandchildren to also go to college.

Soon after WWII she met Duane Moss through mutual friends. She was initially not impressed with him, but with his charm, he eventually won her over with a proposal on Valentine’s Day. The pair married on October 10, 1950, and went to work, with LaWana working as a dental assistant by day and helping Duane construct their West Valley home each evening. Three children--Greg (Cheryl), Marianne (Von), and Marla (Bruce) eventually arrived, and LaWana managed to juggle working with raising a family. She was fiercely supportive of her children, encouraging them in sports, dance, and other activities, and was a champion for their education. Kearns High students can thank LaWana for the opportunity to attend the advanced foreign language classes required for university admission, which had never been offered until LaWana demanded them for her kids.

After raising their family and an early retirement, LaWana and Duane traveled the world, bringing home tales of adventure and souvenirs for their eight grandchildren. When Duane started his own country band, LaWana was their biggest fan, attending every performance and quietly singing along with original songs that Duane had written for her. She cheered her children and grandchildren on at graduations, dance recitals, soccer, and baseball games, and any of the other multitude of activities they were doing. She also took a part-time job as a lunch lady at the nearby elementary school to stay active, where she passed out liberal hugs and chocolate milk on Fridays. She hosted her grandchildren for sleepovers, became famous for her chocolate chip cookies, caramel corn, and homemade ice cream, and had the family over every Sunday for treats and games. No one left without a series of three kisses, pats on the face, and being told that they were special. Her trademark farewell of “Sure love you! Always have, always will!” is one that will ring in the hearts of her family forever.

Her family wishes to express thanks to Harmony Home Hospice for their excellent care and helping LaWana to cross over in comfort, where she is now reunited with her beloved Duane.

In lieu of flowers, hug your loved ones and tell them they are special.

Sure love you, Mom. Always have, always will.

To order memorial trees or send flowers to the family in memory of LaWana Mortensen Moss, please visit our flower store.