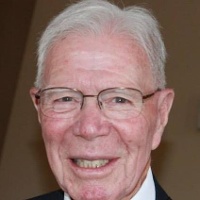 LaMar Spencer Brown passed away after a long battle of complications from a heart operation 13 months ago.  He was born in Salt Lake City, Utah on November 18, 1927 to Linwood (Lynn) Brown and Margaret Ann Spencer.  After serving a mission to the North Central States he married Margaret Alvey Brown on March 2, 1950 in the Salt Lake Temple by President Harold B Lee.

LaMar was called to serve his country and went into the Air Force and was stationed in California. While in California he was called and served a two year ward mission for the Church in the Fresno Stake.  He loved the Lord and the Church of Jesus Christ of Latter-day Saints and was happiest when he was able to serve.  He served faithfully with two Bishops, Bishop of the Lake Ridge 3rd Ward, Stake High Council, and was ordained a Patriarch by President Ezra Taft Benson and served for 32 years.  He also enjoyed serving a mission in Bristol, England with Margaret and working in the Jordan River and Oquirrh Mountain Temples.

LaMar rendered service as the president of the Sons of Utah Pioneers for a term and also loved coaching little league baseball with the young boys.  LaMar said he enjoyed relaxing at our place in Manila where he could boat, water ski, motor Bike and fish with his boys and grandchildren.  In his spare time he liked to grow a garden. He worked for Kennecott in the Refinery Lab as a fire assayer 35 ½ years to give his family a good life, and after he retired he drove cars for Avis until he was 90 years old.

Funeral Services will be held on Wednesday, June 12, at 11:00 am at Magna Utah East Stake Center, 2875 South, 8000 West, Magna, UT.  A Viewing will be held on Tuesday evening from 6:00 pm to 8:00 pm at the McDougal Funeral Home on 4330 South Redwood Road, Taylorsville, UT.  There will also be a viewing prior to the funeral on Wednesday from 10:00 to 10:45 am.  In lieu of flowers, please make donations  to the Missionary Fund of the Church of Jesus Christ of Latter-day Saints.

To send a flower arrangement or to plant trees in memory of LaMar Spencer Brown, please click here to visit our Sympathy Store.

To order memorial trees or send flowers to the family in memory of LaMar Spencer Brown, please visit our flower store.